Is America on the brink of a revolution? 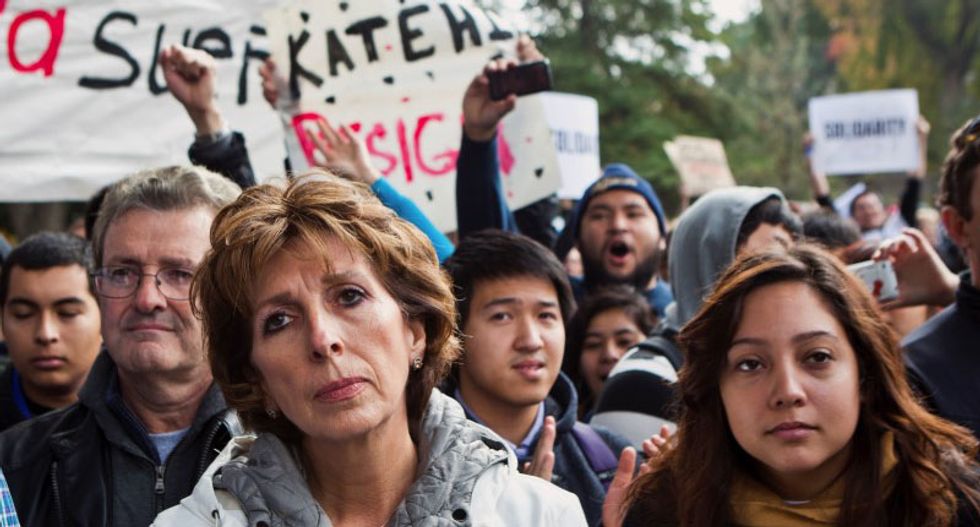 Political scientists have historically been bad at foreseeing the most important developments. Few of us guessed the end of the Cold War; almost no one saw the Arab Spring coming.

In defence of my discipline, there is a reason for that.

Before a momentous event occurs, there are numerous possibilities and different ways events can unfold. After it happens, however, it will appear inevitable. And after it happens, we will be very good at explaining why it had to happen.

Very few of us are now predicting the socio-political situation in the United States, which now features an impeachment probe into President Donald Trump, will lead to an uprising.

But after years of teaching on protests, uprisings and revolutions, it seems to me the U.S. is currently showing all the signs political scientists and historians would identify in retrospect as conducive to a revolutionary uprising.

What brings about a revolution?

Of course, every revolution is unique and comparisons between them do not always yield useful insights. But there are a few criteria we identify in hindsight that are usually present in revolutionary explosions.

Second, there’s a deep conviction that the ruling classes serve only themselves at the expense of everyone else, undermining the belief that these inequalities will ever be addressed by the political elite.

Third, and somewhat in response to these, there is the rise of political alternatives that were barely acceptable in the margins of society before. 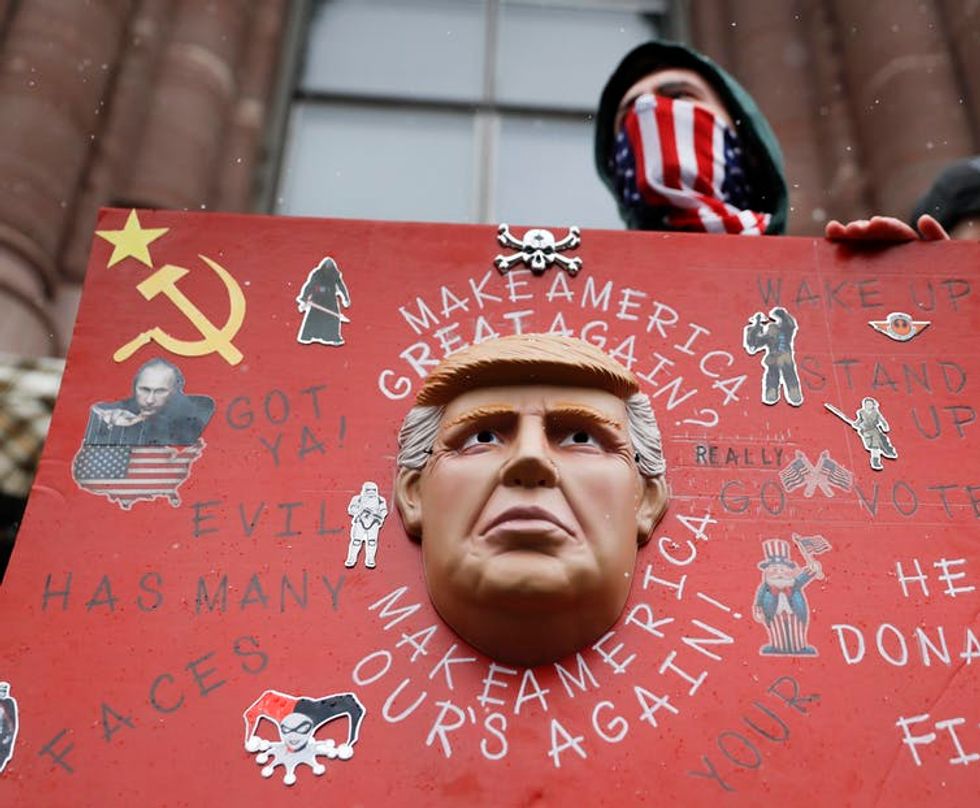 A demonstrator holds up an anti-Donald Trump sign during a March for Our Lives protest for gun legislation in Cincinnati in March 2018.

Combined, these factors create a deeply felt and widely shared sense of injustice, an almost palpable conviction that the system is not working for the majority and only for the very few who abuse their positions of privilege. These qualities weaken any regime’s claim to legitimacy.

But they’re not solely sufficient. The indispensable ingredient of a political revolution is the mental revolution that happens before: personal convictions that the system is no longer working and needs to be replaced.

The coming of a revolution

Before most major revolutions, there’s a substantial increase in the number of protests. Populations display their displeasure and voice their grievances via marches, petitions and protests.

Once the population is convinced that the system is not working, and their grievances will remain unheard, then almost anything can set off a political explosion.

It could be a historic development like the Lutheran Reformation that triggered the great Peasant Uprising of 1525, or the Great War that fuelled the 1917 Russian revolution.

But it could also be a relatively mundane, common event like the taxation conflict that led to the English Civil War in 1640s, or a famine in France in 1788. In the Arab Spring, it was a fishmonger’s anger with the corrupt police.

Really? A revolution in the U.S.?

The United States is displaying all of the above characteristics. The country is experiencing tremendous levels of economic inequality that’s worsening according to every meaningful measurement.

The New York Times writes about the “broken economy,” The Atlantic notes the “toxic class divide” that is “fast becoming unbridgeable,” and the Intelligencer calls recent data released by the Federal Reserve “a damning indictment of capitalism.”

Compared to the previous decade, Americans are working much more for much less pay, and they’re paying substantially more for their basic necessities. Even Fox News is having a hard time spinning the fact the more Americans than ever need to hold multiple jobs, a full-time job and part-time employment on top of that, just to make ends meet.

While the devastation visited upon the working class by the 2008 recession is far from remedied, economists are already forecasting a new recession.

These would be troubling signs in a country where trust in political authority is strong. In the U.S., that’s not the case.

There has been a substantial loss of faith in the political authority. Trust in the political system is at an all-time low, and Americans also seem to have lost faith in politicians, even the rare few they believe mean well.

Meanwhile, the last few years have seen the largest protests in the country’s history. And few of the issues that have spurred the protests, from Occupy Wall Street to the Women’s March and March For Our Lives, have been addressed. In fact, the situations that gave rise to them have either continued or worsened. 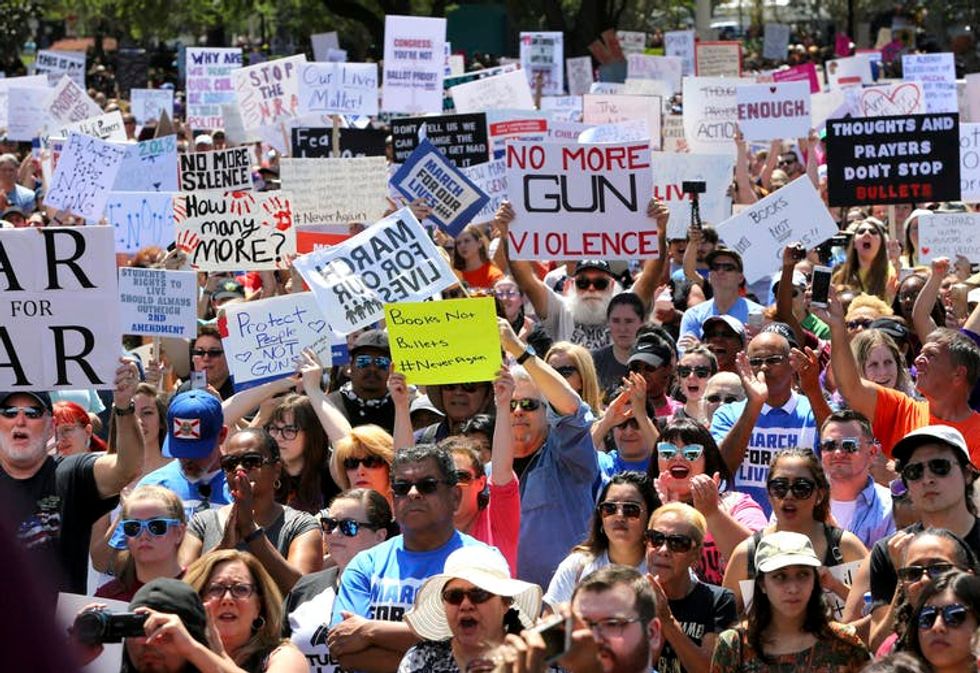 Demonstrators hold up signs in downtown Orlando, Fla., as a part of the nationwide protest against gun violence across the U.S. in March 2018. Large rallies with crowds estimated in the tens of thousands unfolded across the country.

Law enforcement, for decades plagued with justified accusations of systemic racism, is for the first time experiencing difficulties hiring and retaining new officers.

When that happens, people start arming themselves explicitly against the state. All the while, the U.S. Immigration and Customs Enforcement agency is building facilities to train its officers for urban warfare.

In response to the crises, political movements that would have been unimaginable a decade ago are rapidly, and rather visibly, rising.

Though the U.S. system was never free of its racist and colonial roots, the last time fascism has been this prominent in the country was the brief period before the Second World War.

But this time, it’s the government condoning fascist marches and openly deliberating whether anti-fascism is terrorism.

It’s accompanied by a general sense of alienation from and revulsion with capitalism by Americans.

Indeed, two of the leading contenders for the Democratic presidential nomination, Elizabeth Warren and Bernie Sanders, have built their campaigns on the failures of capitalism, the servitude of Washington to the rich and the powerful and the promise of structural change.

Could a U.S. revolution be a good thing?

No. Revolutions are never good things to live through; they bring conflict and war, pain, suffering and hunger, and plunge the country into political instability for decades.

Almost all political rights citizens enjoy and all the protections they have from the arbitrary use of political authority are results of past revolutions.

And sometimes political systems remain so far behind political consciousness that revolutions become the only way to catch up.

In places with longstanding political culture and institutions, where organized political movements engage in politics without using weapons, revolutions can be relatively better-controlled without spiralling into total chaos.

Tunisia, for example, emerged from the Arab Spring and its political revolution unscathed. It was also the only Arab Spring country with longstanding political institutions that took charge of the process. Those four institutions later received the Nobel Peace Prize for protecting the country from absolute chaos.

In the U.S., it’s clear the system is not working for the good of all. There are still numerous possibilities and different ways events can unfold. But unless these systemic failures are addressed soon, political scientists of the future will be explaining how a societal explosion in the U.S. became inevitable.