'Laugh all you want': The View's Meghan McCain pauses lengthy rant to snap at audience members 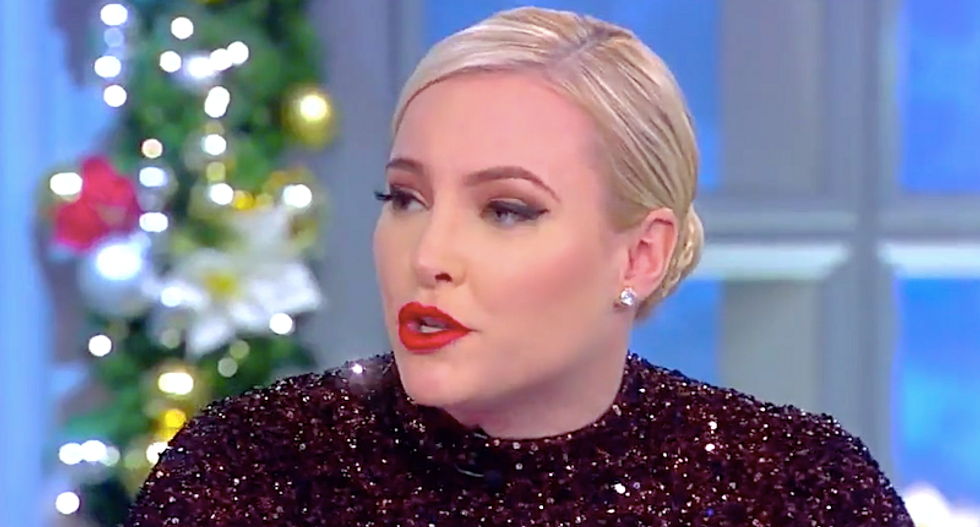 "The View" host Whoopi Goldberg had to assure co-host Meghan McCain the audience was not laughing at her as she complained that Democrats didn't have public support for impeachment.

McCain couldn't defend comments by Senate Majority Leader Mitch McConnell and Sen. Lindsey Graham (R-SC) about a Senate trial for President Donald Trump, but she insisted impeachment was unpopular -- at least in her circles.

"I spend most of my time around conservatives in my off time," McCain said, as Goldberg signaled to a producer that she heard a call for a commercial break, "and I know there are a group of people in this country that think this is completely partisan on the left, as well, and I'm not saying what Lindsey Graham said is okay, because I disagree with it, but the idea our innocence is lost now, go back to again, a president who perjured himself within my lifetime, and having an impeachment process, and I'm just telling you, conservatives right now, if I were a Democrat, I would be out there on the front lines every way possible trying to change their mind, because all I hear right now is the Democrats have gotten out over their skis and Trump wants a long impeachment process because it's good for him and it's helping his numbers."

She got distracted after someone in the audience laughed, and commented.

"Laugh all you want," McCain said.

Goldberg assured her that she wasn't the object of ridicule.

"They're not laughing at you," Goldberg said, "they're laughing at the fact that we have to go so bad, like, he has to go to the bathroom. He's standing there like this. We'll be right back to talk more about this when we come back, that's what they were laughing at."