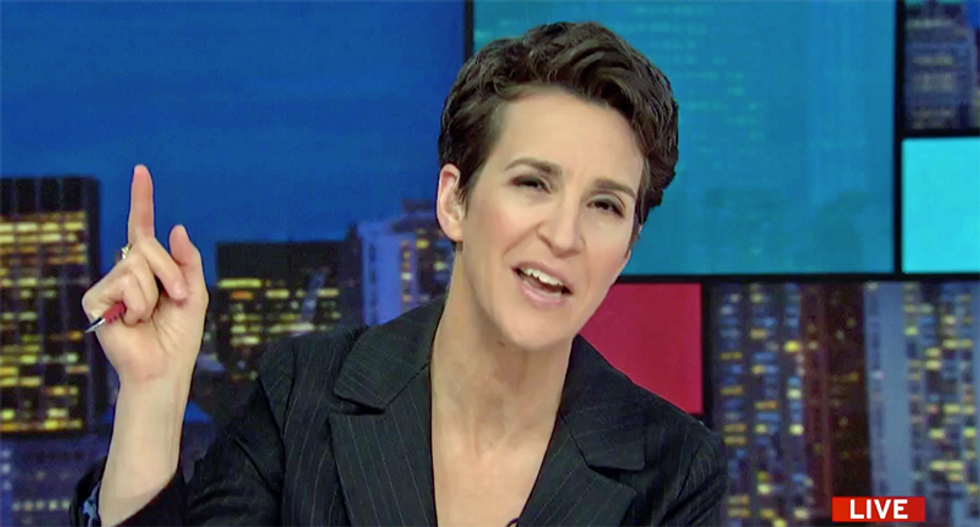 On Thursday, MSNBC's Rachel Maddow noted the sheer volume of editorial boards from newspapers across America calling for President Donald Trump's impeachment and removal from office.

"The editorials that Steve Cohen introduced into the record there that Doug Collins from Georgia said he wanted to read and Steve Cohen said 'I'd love for you to read them,' they're part of a tide of major newspaper editorials that have come out all of a sudden in the last few days in favor of impeachment," said Maddow. "USA TODAY's editorial board saying, quote, 'Until recently we believed impeachment proceedings would be unhealthy for an already polarized nation, rather than simply leaving Trump's fate up to voters next November. But Trump's egregious transgressions and stonewalling in his thuggish effort to trade American arms for foreign dirt on Joe Biden resembled Richard Nixon. It's precisely the type of misconduct the framers had in mind when they wrote impeachment into the Constitution."

"This is from the Washington Post editorial board, which has been critical of impeachment so far," said Maddow. "Quote, 'We take no pleasure in recommending the president's impeachment and are aware of the considerable costs and risks — considerable costs and risks further dividing and inflaming our politics, turning impeachment into one more tool of partisan warfare, perhaps giving Mr. Trump unwarranted aid in his re-election effort. But the House must make its decision based on the facts and merits, setting aside unpredictable effects.'"

"Here's the Boston Globe," said Maddow. "Their editorial board calls President Trump's behavior the textbook definition of corruption. 'The evidence is that Trump's actions are just the sort of behavior the founders had in mind when they devised the recourse for impeachment. The facts show this president has threatened the core values and integrity of our democracy. Congress has a duty to future generations to impeach him.'"

"Here's the LA Times," continued Maddow. "Quote, 'It's also highly likely that Trump will be acquitted by the Republican-controlled Senate, and that rightly or wrongly he would point to that in his re-election campaign as exoneration. But those concerns must yield to the overwhelming evidence that Trump perverted U.S. foreign policy for his own political gain. That sort of misconduct is outrageous and corrosive of democracy. It can't be ignored by the House and it merits a full trial by the Senate on whether to remove him from office.'"

"Here's the Philadelphia Inquirer. The editorial board there is singling out the second article against the president," Maddow went on. "They say, quote, 'It is the second article, the obstruction of Congress, by his unprecedented categorical and defiance of subpoenas and the members of Congress who initiated President Trump has severely disrespected his office and the document he swore to protect and uphold. Should this process end with a trial and a Senate vote to remove him from office, a prospect that seems highly unlikely, it's not hard to imagine that he would insist that the process was invalid, and he would refuse to go. Such an act of tyranny is what the Constitution was created to protect against. That's why this impeachment process is urgent and should move forward without delay.'"