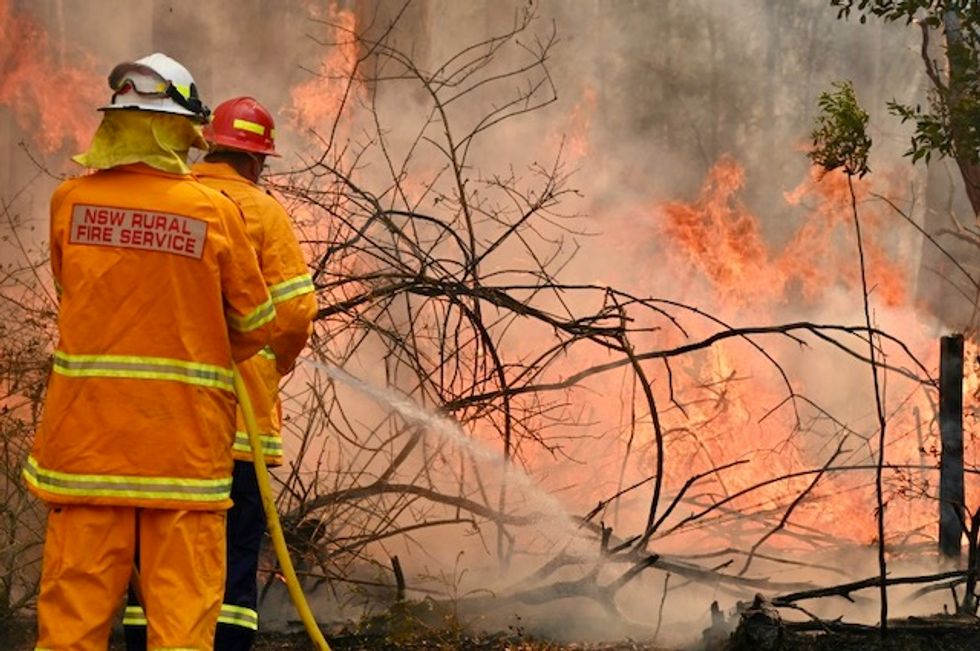 Several Australian bushfires have combined to form a "mega fire" that is burning out of control across a swathe of land north of Sydney, authorities said Friday, warning they cannot contain the blaze.

New South Wales Rural Fire Service deputy commissioner, Rob Rogers said "there are probably more than eight fires in all" that have merged to form what has been dubbed a "mega fire" in an area of national park forest.

The blaze was burning across 300,000 hectares -- an area roughly 60 kilometres (37 miles) across -- within an hour's drive of Australia's largest city, which was again subsumed in a soup of toxic smoke.

"There is just fire that whole way" said Rogers, who added that firefighters could do little more than get any residents out, protect property and hope for an end to fire-friendly dry and windy conditions.

We "cannot stop these fires, they will just keep burning until conditions ease, and then we'll try to do what we can to contain them," he told public broadcaster ABC.

"The best thing we can do is try to protect property and people as much as we can."

Prolonged drought has left much of eastern Australia tinder-dry and spot fires have raged every day for the past three months.

Bushfires are common in Australia but scientists say this year's season has come earlier and with more intensity due to a prolonged drought and climatic conditions fuelled by global warming.

Dramatic footage of firefighters running from a wall of fire ripping through the tree canopy above them was captured overnight in Orangeville, less than 100 kilometres west of Sydney.

The local fire and rescue team that shot the images said no one was injured and the vehicles surrounded by the swirling embers also survived the blaze.

"The video was put up to demonstrate why you need to listen to the fire advisory system," the team from Ingleburn fire station said on Facebook.

"If your property is not prepared for the bushfire season and your (sic) not sure you are able or capable of defending your property if a fire approaches you need to leave straight away," they warned.

Australia Walkabout Wildlife Park/AFP / STR At a wildlife park in the area, 300 animals were evacuated

At a wildlife park in the area, 300 animals were evacuated.

Walkabout Wildlife Park said it had shipped out lizards, dingoes, peacocks and marsupials, as firefighters battled more than 100 fires up and down the eastern seaboard.

"This fire has been doing some crazy things, so we have to be prepared," general manager Tassin Barnard told AFP.

New South Wales rural fire chief Shane Fitzsimmons said some US and Canadian firefighters had arrived to help out.

"We are not only appreciative of their presence here today, but of their sacrifice," said Fitzsimmons -- who has become a fixture on Australian television screens for weeks, updating the public on blazes in towns, national parks and backwaters.

"They are volunteering to sacrifice time from loved ones, from families, to give up that special time of the year around Christmas and New Year to come down here and lend us a hand," he said.

More than 600 homes have been destroyed and six people have died since the crisis began in September.

That is many fewer than Australia's deadliest recent fire season in 2009 when almost 200 people died, but 2019's toll so far belies the scale of devastation.

An estimated two million hectares have burned -- the size of some small countries -- across a region spanning hundreds of kilometres (miles).

The fires have taken a toll in Sydney and other major cities, which have been blanketed in toxic smoke for weeks and occasionally sprinkled with snow-like embers.

Fitzsimmons said he could not "overstate the effect that this profound drought is having" as he warned of a long, painful summer ahead.