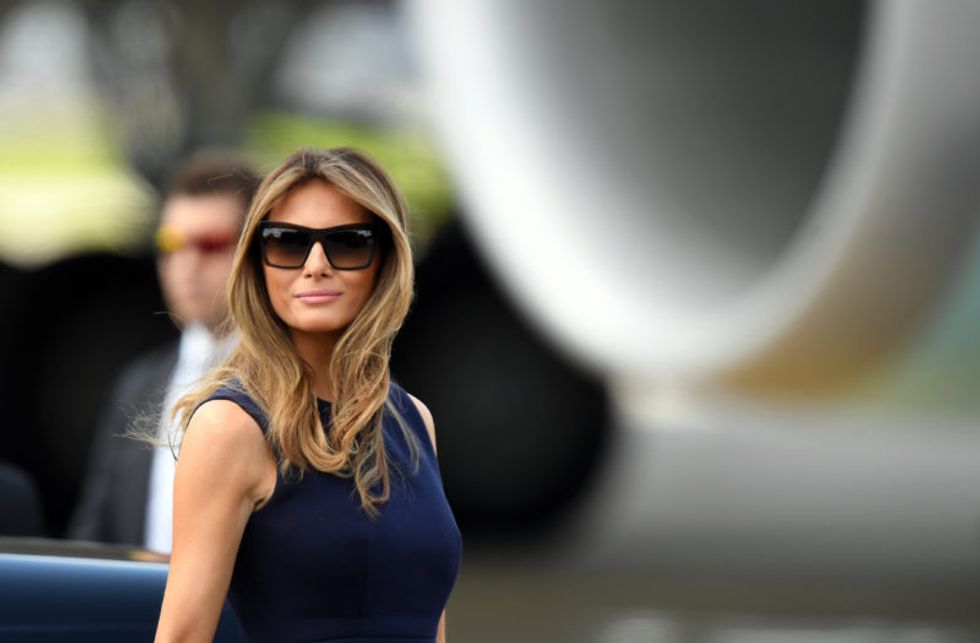 Responding to climate activist Greta Thunberg being named TIME's Person of the Year this week, President Trump lashed out with his usual vindictiveness, this time directed at a 16-year-old.

"So ridiculous," Trump tweeted on Thursday. "Greta must work on her Anger Management problem, then go to a good old fashioned movie with a friend! Chill Greta, Chill!"

Some called Trump's tweet hypocritical, considering it came after a wave of outrage emanated from the Trump camp over Professor Pamela Karlan daring to mention the president’s son, Barron, during the impeachment hearings in Washington D.C. last week.

“A minor child deserves privacy and should be kept out of politics,” Melania Trump tweeted. “Pamela Karlan, you should be ashamed of your very angry and obviously biased public pandering, and using a child to do it.”

But many were wondering how the First Lady's words square with the fact that her own husband clearly didn't follow her advice -- advice that's the main message behind her BeBest anti-bullying campaign -- which prompted Melania to address the apparent contradiction in a statement released today.

"BeBest is the First Lady's initiative, and she will continue to use it to do all she can to help children," read the White House statement released on behalf of Melania. "It is no secret that the President and First Lady often communicate differently -- as most married couples do."

Then, the statement seemed to justify Trump's attack.

"Their son is not an activist who travels the globe giving speeches," the statement continued. "He is a 13-year-old who wanted and deserves privacy."

Statement from @PressSec to me regarding @FLOTUS response to @realDonaldTrump’s tweet directed at @GretaThunberg : https://t.co/4BPxK2KSTd
— Kate Bennett (@Kate Bennett) 1576264068.0

Many saw the tweet as an attempt to blame Thunberg for Trump's words.

@KateBennett_DC @PressSec @FLOTUS @realDonaldTrump @GretaThunberg That’s why BeBest is a joke. She has no credibility on the issue
— Tanya Chirayil (@Tanya Chirayil) 1576264591.0

'Donald Trump has finally run out of places to hide'

The Democratic-controlled U.S. House Ways and Means Committee on Wednesday received six years of former President Donald Trump's federal tax returns, ending a three-year battle in which the 2024 Republican presidential candidate fought fiercely against sharing documents that every one of his predecessors since Richard Nixon have disclosed.

"Donald Trump has finally run out of places to hide," wrote Jason Easley and Sarah Jones at PoliticusUSA's The Daily. "For years the speculation about what is in the tax returns that Trump had refused to release ran rampant. Was he really broke? Did he take money from foreign governments? Did he commit crimes? There were so many questions, and now the answers could finally be arriving."