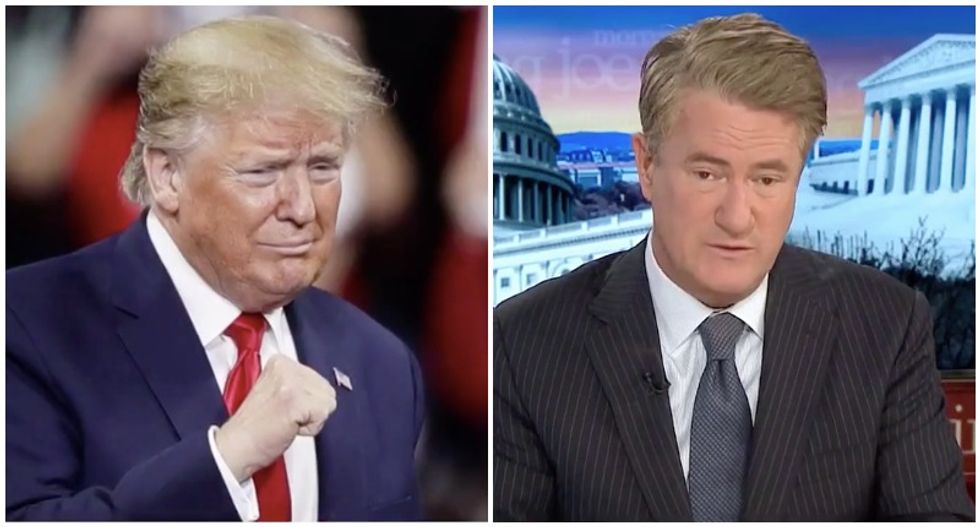 MSNBC's Joe Scarborough busted Attorney General William Barr for spreading the same lies about the FBI that Roy Cohn used to help Donald Trump and his father out of a racism jam.

The attorney general told NBC News reporter Pete Williams that the FBI had spied on Trump's 2016 campaign, although a court approved surveillance warrants against some associates, and the "Morning Joe" host warned that Barr was unraveling constitutional norms.

"This is the language that Roy Cohn used attacking the (Department of Justice) and the FBI back in the 1970s, when the federal government caught Donald Trump and his father discriminating against minorities, and he's doing the same thing," Scarborough said. "But he's the attorney general of the United States."

Barr also complained that an "irresponsible press" exaggerated the seriousness of the Russia investigation, but Scarborough easily exposed that claim as a lie.

"The president's assistant campaign manager, found guilty, and the same with a man that he claimed was one of his top foreign policy advisers, found guilty," Scarborough said. "We can go through the numbers. They're absolutely astounding, the number of people connected to Donald Trump who were found guilty of a federal crime, spending time in jail and turned state's evidence against other people in the administration -- and, of course, Roger Stone, found guilty."

Scarborough said he has believed all along that democratic institutions would hold strong against Trump's abuses, but he said Barr's attacks have made him question that faith.

"I've always said, our institution will check him, Madisonian democracy will check him," he said. "I'm not a big believer of going in and talking about constitutional conventions or changing this part of the government or that part of the government. I will say three years in that the one area where our system obviously needs to be checked has to do with the appointing of an attorney general, and I was saying this before Barr became the attorney general."

If democracy holds against Trump, he said changes must be made to prevent another Barr from serving the president's interests instead of the Constitution.

"I think there has to be a higher -- forgive the pun -- a higher bar to becoming attorney general of the United States," Scarborough said. "Maybe it's a two-thirds vote in the Senate to select and remove somebody. We just can't have any president having an attorney general who will protect them from criminal actions that they've taken."

"That is the one area of reform that I think a lot of people are going to be looking at when Donald Trump leaves office," he added.