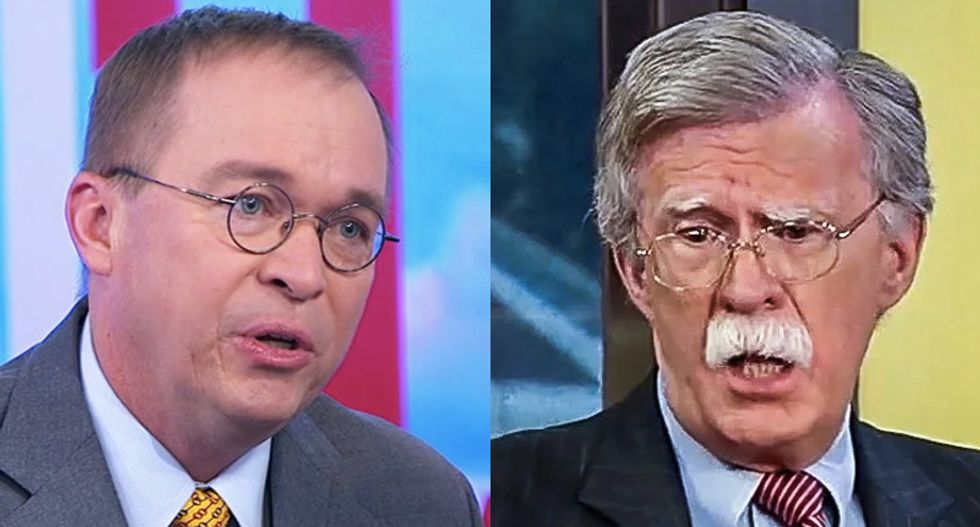 Newly revealed evidence shows President Donald Trump's efforts to pressure Ukraine to help his re-election campaign threw his administration into chaos -- and ended only after a whistleblower revealed the scheme.

The New York Times interviewed dozens of current and former administration officials, congressional aides and others, and examined previously undisclosed emails and documents, to map out an account of the 84-day period from Trump's first inquiry about withholding Ukraine aid and his decision to release the funds.

Trump's demands set senior administration officials against one another as they expressed alarm over the scheme or worked to carry out the president's orders -- which formed the basis of his impeachment by the U.S. House of Representatives.

"Opposition to the order from his top national security advisers was more intense than previously known," the Times reported. "In late August, Defense Secretary Mark T. Esper joined Secretary of State Mike Pompeo and John R. Bolton, the national security adviser at the time, for a previously undisclosed Oval Office meeting with the president where they tried but failed to convince him that releasing the aid was in interests of the United States."

In one previously unknown episode, top lawyers at the Office of Management and Budget developed an argument -- with assistance from White House lawyers and the Justice Department -- that Trump, as commander in chief, could simply override Congress, which had approved the Ukraine aid.

Mick Mulvaney, the acting White House chief of staff and director of OMB, was deeply involved in transmitting Trump's orders on the freeze to other administration officials, the newspaper reported.

"The interviews and documents show how Mr. Trump used the bureaucracy to advance his agenda in the face of questions about its propriety and even legality from officials in the White House budget office and the Pentagon, many of whom say they were kept in the dark about the president’s motivations and had grown used to convention-flouting requests from the West Wing," the Times reported. "One veteran budget official who raised questions about the legal justification was pushed aside."

By late summer, administration officials were facing pressure from Congress to release the aid they had approved -- and then White House lawyers notified the president of the whistleblower complaint against him.

White House officials still did not expect Trump to release the aid, because he had been rejecting the advice of his national security team to do so.

Then, on Sept. 11 -- the day after Bolton was forced out of the White House -- the president suddenly released the aid.

“I have no doubt about why the president allowed the assistance to go forward,” said Rep. Eliot Engel (D-NY). “He got caught.”