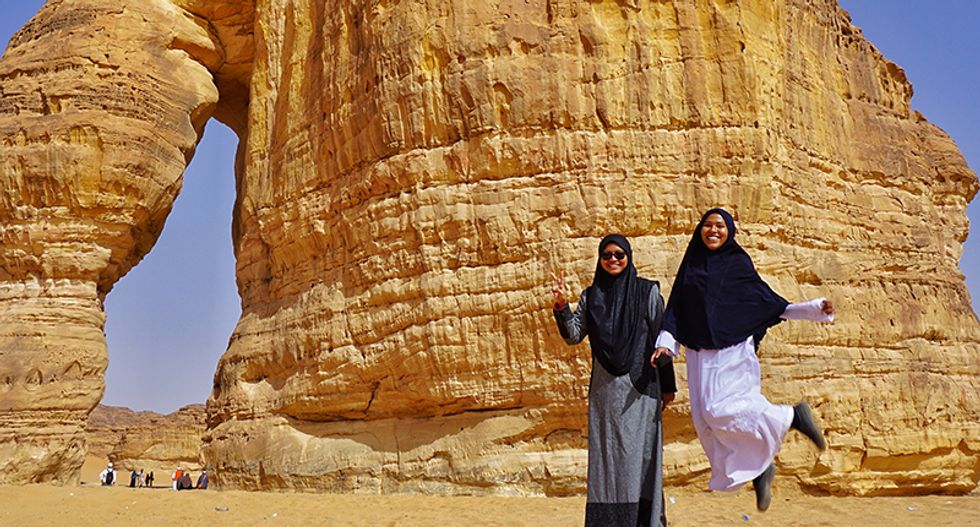 Saudi Arabia isn't exactly the most friendly place for women but now the country is trying to encourage tourism, The New York Times reported.

In 2017 Mohammed Bin Salman gave women the right to drive, as long as they're following the country's "guardianship system," that requires permission or accompaniment of men if women are to do anything. That in addition to their treatment of Yemen and the brutal murder and dismemberment of Washington Post reporter Jamal Khashoggi doesn't make it the ideal location for a summer vacation.

Ghazi Al-Anazi tried to encourage British businesses to visit the country to see the "wind-carved hills of the Saudi desert." After 11 years, he was feeding French tourists

“I know what they want to do, and what I need to do about it,” he said.

He's eager to capitalize on the recent decision by the Saudi government to issue tourist visas for the first time. Meanwhile, the kingdom is funneling billions into new airports, flashy resorts and other necessary demands for tourists. It's part of Salman's Vision 2030 program, which aims to diversify the economy.

"The Saudis are hiring international real estate executives and introducing elaborate advertising campaigns to try to put themselves on the map. Already, there are signs the push is paying off: Saudi hotel room sales in the first nine months of 2019 increased 11.8 percent from the same period last year," The Times reported.

How many people want to visit an ultra-conservative country that is known for arresting or murdering dissenters. Only recently the country allowed unmarried couples to share a room. Alcohol is still banned. Women's bodies and heads must still be completely covered, so the beach isn't an option unless you're male. The new "relaxed" laws allow women to wear Western clothing underneath the coverings.

Still, Saudi Arabia is investing in its western coast with "The Red Sea project," which will attract divers and snorkeling to the country's 120 miles of islands and coral reefs. The new burka bathing suit allows women to be completely covered with pants, a long-sleeved shirt and head covering.

You can read more about Saudi Arabia's attempt to attract tourism at The New York Times.