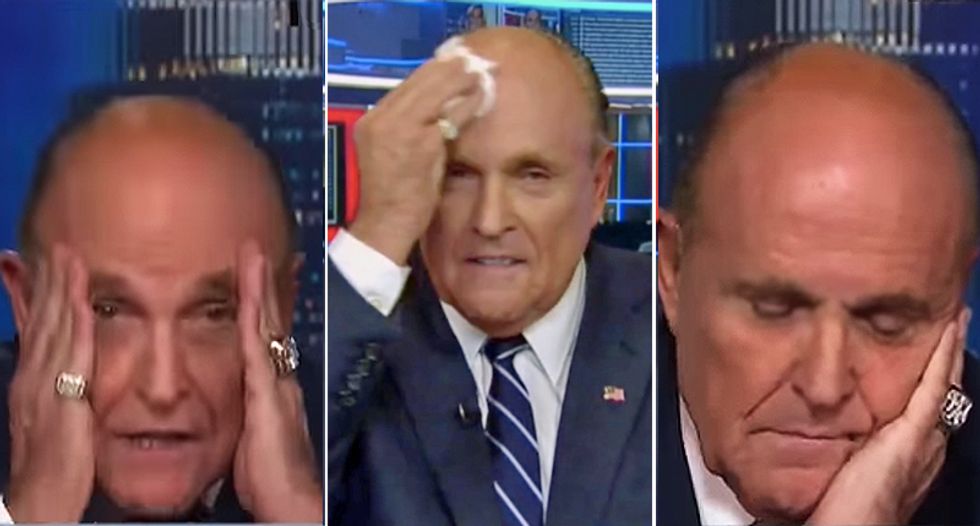 In 2019, Rudy Giuliani was Democrats' gift that kept giving throughout the year. Confessing to sketchy behavior, ranting on live television, and generally humiliating the president, Giuliani racked up insane moments.

Check out the top moments from the year that left many, on both sides of the political aisle, shaking their heads at President Donald Trump's top lawyer:

Progressive host Chris Hahn hit a nerve in Giuliani during a September Fox News appearance, Hahn said that former Vice President Joe Biden and his family would be within their rights to sue Giuliani for libel. For that, Giuliani said he should sue Hahn for libel.

"Oh, please do," quipped Hahn. He then tried to explain the libel laws.

2. The great butt-dial heard around the world.

If there's one thing Guiliani learned this year, it's that he needs to learn how to lock his iPhone. The former New York City mayor accidentally called reporters when he was in critical meetings where he was asking for money that far exceeded campaign finance limits. The reporter called didn't pick up, so the whole incident was captured in a recorded voicemail message that was eventually released to the public.

CNN host Chris Cuomo has invited Giuliani on his show weekly since their 28-minute shouting match in September, but it hasn't happened yet. Perhaps it's Cuomo's knack for getting Giuliani to contradict himself in real-time. During the interview, Giuliani said that he never asked Ukraine to look into Joe Biden's son, only to contradict himself minutes later when he said, "Of course I did!"

It wasn't long after the new year that Giuliani faced off against Cuomo and accidentally admitted Trump might have colluded with Russia. While special counsel Robert Mueller was prevented from indicting the president due to a Department of Justice rule, that didn't stop the president's lawyer from outing the crimes.

In the interview, Cuomo asked Giuliani about the revelation that former Trump campaign chair Paul Manafort gave confidential polling data to Russian operatives that could get it back to Moscow.

"Well, you just misstated my position," said Giuliani in the interview. "I never said there was no collusion with the campaign! Or between people in the campaign. I have no idea if --"

"I have not! I said the president of the United States. He said he didn't. He didn't say nobody -- how would you know nobody in your campaign--" Giuliani said.

"He actually did say that, Rudy," Cuomo explained.

5. Rudy reveals he has all the dirt against the president.

One of the biggest problems Giuliani made for the president was in revealing he has documents, videotapes, tape recordings and text messages from the State Department that show he was basically running an investigation of the Biden family at Trump's direction.

Bonus: In an Atlantic interview, Giuliani proclaimed that he's the "real hero" of this story. That along with Trump's claim that Giuliani is a "crime fighter," prompted Stephen Colbert to craft this video: