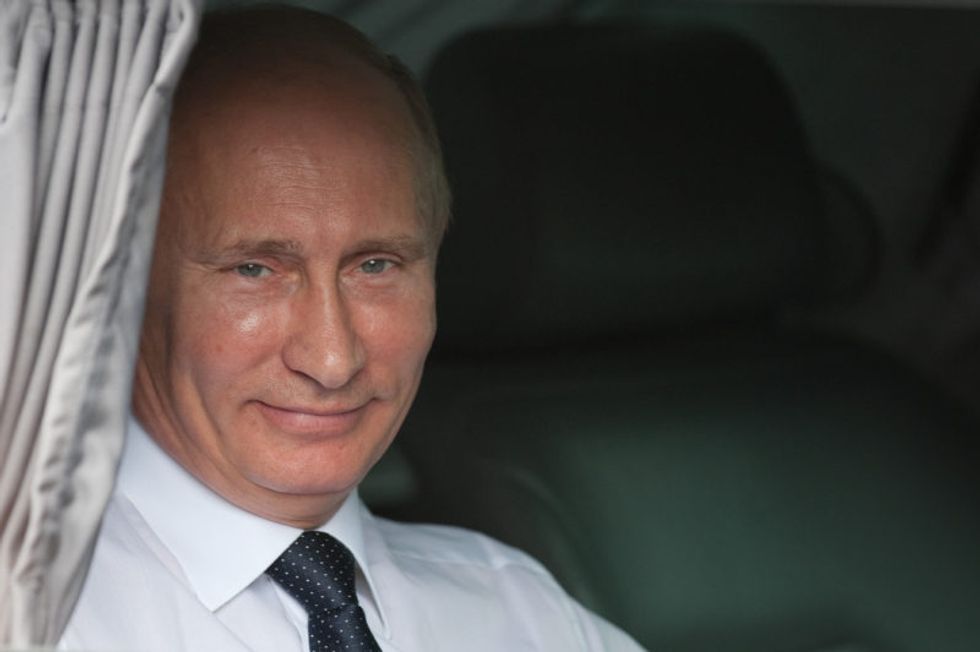 In the wake of Russian Foreign Minister Sergey Lavrov's visit to the Oval Office last week, Russian state TV aired a segment titled “Puppet Master and ‘Agent’—How to Understand Lavrov’s Meeting With Trump" and characterized the visit as an example of President Trump being subservient to Russian interests. As The Daily Beast's Julia Davis points out, "President Vladimir Putin’s propaganda brigades enjoy watching the heightened divisions in the United States, and how it hurts relations between the U.S. and Ukraine."

That enjoyment manifested itself in the segment, which aired on the Russian Sunday news show Vesti Nedeli, where host Vladimir Soloviev quipped that Trump would have to seek refuge in Russia once he's out of office.

"State-television news shows use every opportunity to demoralize the Ukrainians with a set of talking points based on the U.S. president’s distaste for their beleaguered country," Davis writes before citing another state-funded TV show where the host boasted about the meeting between Trump and Lavrov to a Ukrainian panelist.

“There are no disagreements or contradictions between Trump and Russia,” said Valery Korovin, director of the Center for Geopolitical Expertise, appearing on the state-television channel Rossiya-24.

The Kremlin is even promoting the work of Trump's personal lawyer, Rudy Giuliani. After Giuliani's return to US from his "evidence gathering" trip to Ukraine, Russian state TV began airing clips of his OAN (One America News Network) “documentary," which claims to provide evidence that Ukraine meddled in the 2016 US election and that former Ambassador Marie Yovanovitch lied under oath to Congress "to whitewash [Joe] Biden’s corruption.”

"Giuliani’s efforts on behalf of President Trump are bound to pay propaganda dividends for the Kremlin,' Davis writes.

"Putin has expressed undisguised delight with the crusade led by Trump and Giuliani to whitewash Moscow’s interference in the U.S. elections and pin the blame on Kyiv," he continued, adding that

According to Davis, the emerging narrative from Russia propaganda outlets puts the "hypocrisy of the Republicans on full display."

"The Kremlin, having argued for years that democracy is a sham and the West is devoid of morals and principles, can now showcase the GOP as its 'Exhibit A.'"

Read her full piece over at The Daily Beast.

Republicans are making another major shift in election strategy as GOP Leader Mitch McConnell seeks to regain control of the 50-50 upper body in the 2022 midterm elections.

"The National Republican Senatorial Committee is canceling the remainder of its fall ad slate for New Hampshire after launching a coordinated ad with GOP nominee Don Bolduc earlier this week," Politico reported. "The move comes as New Hampshire appears increasingly out of reach for the GOP, although Republicans still have millions more on the books for the final month of the campaign."

Pastor refuses to baptize infant of couple 'living in sin'

On Friday, WBLT News reported that a Mississippi reverend's letter to two new parents has gone viral on social media after he unexpectedly refused to perform a baptism of their infant, due to their being unmarried.

"Kamri Mclendon lives with her boyfriend of two years, Tristan Mcphail, in Sumrall. In May, the 18-year-old gave birth to a girl, Presleigh. She said the pregnancy was not planned, but her daughter has become the couple’s 'greatest blessing,'" reported Josh Carter and Andrew McMunn. "Mclendon said she grew up in the church, and thus wanted to have an infant baptism performed on Presleigh in the Hickory Grove United Methodist Church. Her family has been attending the church for 'generations,' and it is where Mclendon herself was baptized."

The Herschel Walker abortion scandal that began in The Daily Beast on Monday expanded on Friday when the woman spoke with The New York Times.

"A woman who has said Herschel Walker, the Republican Senate nominee in Georgia, paid for her abortion in 2009 told The New York Times that he urged her to terminate a second pregnancy two years later. They ended their relationship after she refused," the newspaper reported. "In a series of interviews, the woman said Mr. Walker had barely been involved in their now 10-year-old son’s life, offering little more than court-ordered child support and occasional gifts."