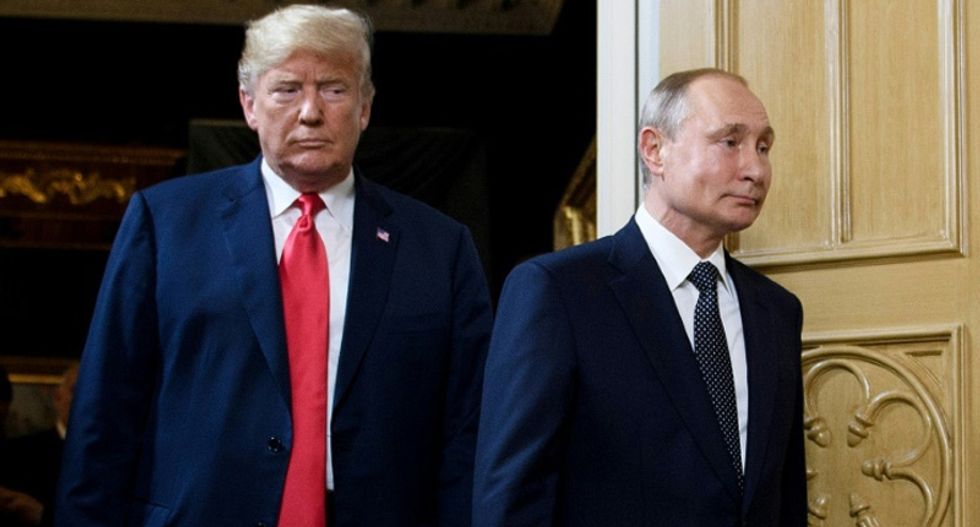 The bill was first introduced by Trump ally Sen. Lindsey Graham, R-S.C., in 2018 and re-introduced again this year. The legislation, which Graham calls a “sanctions bill from hell,” came in response to Russia’s invasion of Ukraine, its interference in the 2016 U.S. election, its activities in Syria and its attacks on Russian dissidents.

The Defending American Security from Kremlin Aggression Act of 2019 (DASKA) would impose sanctions on Russian oligarchs, banks and sovereign debt. The bill would also sanction Russian ship-building and energy industries. The legislation also requires the State Department and Intelligence Community to report to Congress whether Russia is meddling in U.S. elections every 90 days.

Though the bill has drawn bipartisan support, the Trump administration sent a 22-page letter to Senate Foreign Relations Chairman Jim Risch, R-Idaho, saying that it “strongly opposes” the bill in its current form. The letter was first obtained by The Daily Beast.

The letter took issue with the bill’s requirement for the administration to report Russian election meddling. The letter said the provision was “designed for failure,” because it “seems impossible” to certify that Russia is not meddling in elections.

The letter argues that the entire bill is “unnecessary,” because the administration has already “aggressively imposed sanctions” on Russia (despite Trump’s own opposition to the previous sanctions).

The administration argued that the “most objectionable” parts of the bill were the broad sanctions on Russian oligarchs and industries, which the letter argued would “negatively impact” American energy markets.

The letter demanded a large number of revisions, particularly ”making these new sanctions permissive instead of framed as mandates” and giving the administration “unconditioned waiver authority” over the sanctions.

It also argued that the requirements in the bill "would divert resources from the ongoing aggressive targeting of Russian malign actors under existing authorities . . . as well as from efforts with respect to Iran, North Korea, ISIS, Venezuela, Hezbollah, counterterrorism, human rights and corruption and other (U.S. government) priorities."

Trump’s opposition did not stop the Foreign Relations Committee from voting 17-5 to advance the bill to a full Senate vote, though Risch, along with Sens. Rand Paul, R-Ky., Johnny Isakson, R-Ga., John Barrasso, R-Wy., and Ron Johnson, R-Wis., all voted against it.

Graham said Wednesday that he was "incredibly pleased with the overwhelming bipartisan support for my legislation,” according to CNN. He added that he was open to amending the bill.

"This strong vote indicates an overwhelming desire by the Senate as a whole to push back against Russian interference in our election and Putin's misadventures throughout the world," Graham said."I am committed to working with my colleagues to improve this legislation, but it must be strong to be meaningful.”

Samuel Charap, a senior political scientist at the RAND Corporation, told CNN that no sitting president likes congressionally-imposed sanctions, but the Graham bill shows that “Congress doesn't trust the president on Russia policy.” Republicans tried to walk a tightrope during the debate of the bill in trying to “bash Mr. Putin without impugning Mr. Trump,” The New York Times reported.

Despite the administration’s claim that it already “aggressively” imposed sanctions on Russia, Trump was six months late in imposing congressionally-required sanctions on the U.S. adversary after the poisoning of former Russian spy Sergei Skripal and his daughter in the U.K.

Trump has repeatedly pushed a Kremlin propaganda talking point that Ukraine — not Russia —  interfered in the election. He entered the White House calling to lift Russian sanctions and has repeatedly defended Russian President Vladimir Putin. Trump administration officials previously attempted to water down sanctions against Russia and ease sanctions on the companies of a Putin-linked oligarch, which long employed former Trump campaign chief Paul Manafort, who is currently serving a court-mandated sentence in federal prison.

Trump’s relentless defense of Putin, as well as his denial of Russian interference in the 2016 election, ultimately led to his impeachment. Trump lawyer Rudy Giuliani’s scheme to pressure Ukraine into investigating former Vice President Joe Biden began as an attempt to discredit the Russia probe and prove that Ukraine actually meddled in the election.

After the impeachment vote, it was Putin who defended Trump.

"The Democratic Party, which lost the elections, is now trying to revise this history through the means that they have at their disposal — first by accusing Trump of collusion with Russia. But then it turned out there was no collusion," Putin said on Thursday. "It could not form the basis for impeachment, and now there is this made-up pressure on Ukraine."

Putin added that he was confident Republicans would keep Trump in office.

“As far as I know the Republicans hold the majority so it's unlikely they will want to remove the representative of their party for some made-up reasons,” he said.