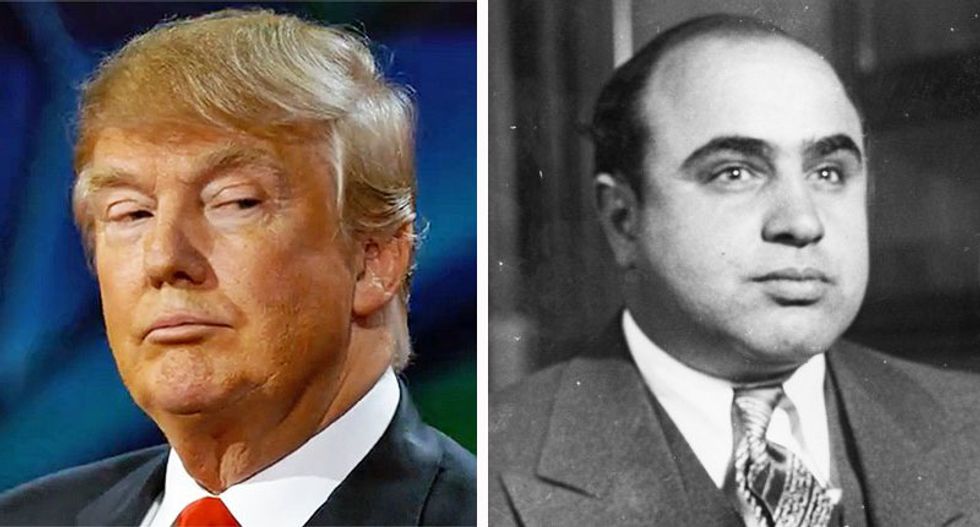 In a piece for New York, columnist Jonathan Chait claimed there is little difference in how Donald Trump is staving off investigations and possible criminal charges and the way that notorious mobster Al Capone conducted his affairs.

As Chait notes, there is no shortage of crimes that the President is under investigation for -- including what may be contained in his tax returns that he has yet to release -- and that the president is using a multiple-pronged attack on his foes and critics to stay in office and out of jail.

"But rather than growing into the office, Trump has fulfilled the darkest fears about his character and his conduct," Chait writes. "Trump has run through the authoritarian threats he made as if it were a to-do list. Retribution against owners of independent media? Check. Promoting the use of war crimes? Check. Collecting money from interested parties at home and abroad? Check. Inciting violence to intimidate critics? Check."

"Trump has compounded all the abuses of power he promised before taking office by committing new ones he hadn’t," he continued. "He engaged in a long series of acts that would be textbook obstruction of justice but for Robert Mueller’s decision that he couldn’t directly accuse Trump of a crime. He has smashed the delicate balance of power between the legislative and executive branches by refusing to accept any role for congressional oversight whatsoever. And he has promised pardons to his subordinates in advance if they break the law carrying out his agenda."

Stating, "It may be the brazenness of Trump undertaking a new foreign collusion scheme immediately after escaping punishment for his last one," the columnist suggests Trump's pattern of deceit and obstruction has a historical precedent in the actions of mobster Capone.

"The feds were looking to nail Al Capone for a long time before they finally prosecuted him for tax evasion," he explained. "Capone, like Trump, had a knack for intimidating law enforcement, bribing witnesses, and withholding evidence. His crimes were something everybody knew but were difficult to prove. His punishment was both procedurally fair — Capone was as clearly guilty of tax evasion as Trump is of pressuring Ukraine to investigate his domestic rivals — yet frustratingly too narrow to capture the full breadth of his culpability. "

"That discrepancy will challenge historians who study Trump’s criminal presidency. But it is truly odd to see it used as a case against impeaching him at all," he concluded.