Trump fumes over impeachment drive while he's at NATO summit 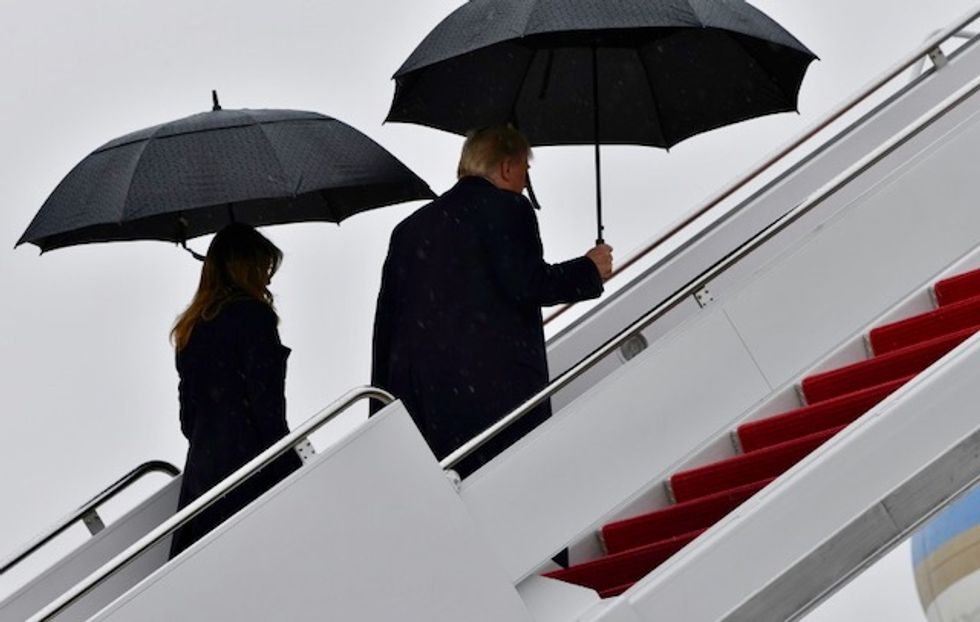 President Donald Trump branded Democrats a "disgrace" Monday for holding impeachment proceedings while he attends a NATO summit in England and rejected participating in what he called "a hoax."

"It's an absolute disgrace what they're doing to our country," he said. "The whole thing is a hoax. Everybody knows it."

While Trump is away, House Democrats will ramp up what appears to be inevitable momentum to making the real estate tycoon only the third president ever impeached.

This starts Wednesday with a hearing in the Judiciary Committee at which experts will weigh whether Trump's alleged crimes in pressuring Ukraine to investigate a domestic political opponent meet the constitutional impeachment bar.

AFP/File / Olivier Douliery House Judiciary Committee Chairman Jerry Nadler, a longtime political nemesis of President Donald Trump, will lead the process to draw up articles of impeachment against him

Trump's chief White House lawyer, Pat Cipollone, told the Democratic leader of the committee, Jerry Nadler, on Sunday that he was rejecting an invitation to send representatives to the session.

"We cannot fairly be expected to participate... while it remains unclear whether the Judiciary Committee will afford the President a fair process through additional hearings," Cipollone wrote.

Cipollone did not rule out White House participation in subsequent hearings. Throughout the drama, however, Trump has opted for stone-walling and flat-out resistance to what his supporters say amounts to a "coup."

Trump got a boost Monday from an interview in which Ukrainian President Volodymyr Zelensky insisted he had not come under pressure from Trump.

The US president is accused of brazenly using a hold-up in hundreds of millions of dollars of military aid to Ukraine to force Zelensky to announce a politically embarrassing probe into Joe Biden, one of the lead Democrats challenging Trump for the presidency in 2020.

A stream of high-level diplomats and several White House officials have testified in Congress about Trump's back-channel communications with Zelensky.

But Zelensky said Monday that he'd not been forced into anything.

"I did not speak with US President Trump in those terms: 'you give me this, I give you that,'" Zelensky said in an interview with several publications, including Germany's Der Spiegel magazine.

Trump says he was right to raise his concerns over alleged corruption by Biden and his son Hunter, who was controversially named to the board of a Ukrainian energy company accused of corrupt practices.

AFP / Nicholas Kamm US President Donald Trump, together with First Lady Melania Trump, is heading to Britain for a NATO summit but his impeachment scandal will follow him

And he repeatedly echoed the Zelensky interview on Monday, saying "the Ukrainian president came out and said very strongly that President Trump did absolutely nothing wrong."

"That should be case over," Trump said.

Democratic lawmakers say that Zelensky, a neophyte politician facing armed conflict with Russia, was desperate to please Trump from the outset and remains unable to speak his mind for fear of losing support.

The Judiciary Committee is expected to consider at least four articles of impeachment, including abuse of power, bribery, contempt of Congress and obstruction of justice. A full vote in the Democratic-led House is currently expected before Christmas, with the Republican-dominated Senate holding a trial -- with acquittal seen as all-but-assured -- next year.

Democrats say they want to hear from former national security adviser John Bolton, acting White House chief of staff Mick Mulvaney and Secretary of State Mike Pompeo. All three are believed to have direct knowledge of Trump's actions toward Ukraine.

So far they have refused to testify, claiming "absolute immunity" as confidants of the president.

But as the Judiciary Committee hearings unfold, the White House may yet decide to send representatives to get their message across in what will likely be combative and at times raucous live television events.

She said the Democrats were inventing the entire scandal because "they have no idea how to beat him in 2020. They fear he will be reelected."

But another 2020 Democratic candidate, Senator Amy Klobuchar, says it's the Republicans who are talking fiction.

Compared to the scandal which brought down president Richard Nixon, she told NBC television, this is "a global Watergate."