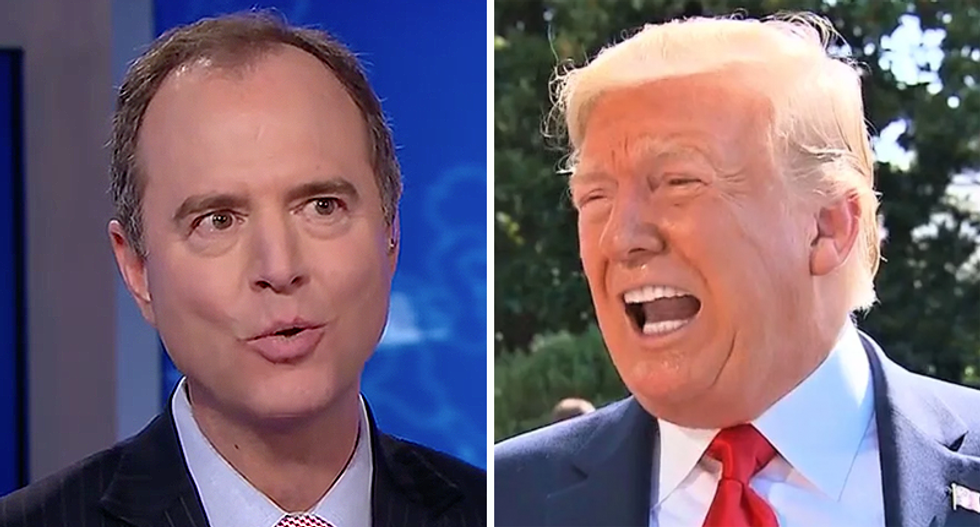 As the chair of the House Intelligence Committee, Schiff oversaw the investigation of the Ukraine scandal that led directly to Wednesday’s upcoming impeachment vote. In this role, he inevitably drew the fire of Republicans and Trump defenders across the country, who conjured up repeated attacks on the process and Schiff’s credibility in an attempt to divert criticism from the president and to undermine the investigation’s damning revelations.

One moment that particularly outraged Trump defenders occurred when Schiff gave a mock-performance of Trump’s July 25 phone call with Ukrainian President Zelensky. Schiff exaggerated the facts and gave his own interpretation of the exchange, making clear that he was engaging in something of a “parody” of the president’s conduct. But Trump and Republicans have seized on the moment and accused the chair of lying, continually bringing up the remarks to malign the process.

Trump, having obsessed over the issue for months now, brought it up again on Tuesday in the Oval Office, saying:

“[Impeachment] is a total sham. When you have a guy like Shifty Schiff go out and make up a statement that I made, he said, ‘This is what he said,’ but I never said it. He totally made it up. In Guatemala, they handle things much tougher than that. And because of immunity, he has House immunity, because of immunity he can’t be prosecuted.”

Trump has been fixated on this event, and he went further than almost anyone else in this criticism of Schiff. Trump has tweeted that Schiff should be “questioned at the highest level for Fraud & Treason” because of these remarks and accused him of “lying to Congress.” Lying to Congress is, indeed, a crime, but only for witnesses, not members. And obviously, nothing Schiff did was close to fraud or treason.

Eventually, Trump learned that members of Congress actually have broad immunity under the Constitution from prosecution for the remarks they make as part of their body’s proceedings, though the accusations of criminal conduct against Schiff were baseless. Trump then started to say Schiff should be “impeached,” even though that process only applies to members of the executive and judicial branches, not Congress.

The fact that Trump has actually retained the fact that Schiff can’t be arrested for his comments in Congress actually suggests he genuinely cares about the issue. Usually, he just goes on telling lies and rarely learning anything, saying whatever he feels suits his interest at the moment. The fact that he actually changed his mind about this suggests that he actually talked to somebody about the possibility of Schiff getting arrested and, to his displeasure, he learned that it was impossible. (Though again, Trump is just wrong that Schiff’s remarks would have been criminal if made outside of Congress.)

Trump has also made similar remarks about Nancy Pelosi, though he’s often less specific about what she has done wrong other than oversee the impeachment.

Having realized, apparently, that Schiff and Pelosi won’t be impeached or arrested, Trump has also taken to calling for them to be witnesses at his Senate trial. They would have nothing of substance to add as fact witnesses about the charges against the president, of course, but his goal is to put others on trial.

And as his quote above suggested, he even fantasizes about extrajudicial or abusive methods of law enforcement, saying, “In Guatemala, they handle things much tougher than that.” Of course, this is the same person who has been complaining law enforcement misconduct in the case of the FBI’s ommissions and misleading statements in obtaining surveillance of Carter Page, a former associate of his 2016 campaign.

We already know, though, that Trump tried to weaponize the law enforcement of Ukraine against former Vice President Joe Biden, a potential 2020 rival. We know, too, that he called on the U.S. Justice Department to investigate Hillary Clinton, his 2016 rival. (Both of these should facts be seen impeachable conduct, though only the first has led to Trump’s impeachment.)

But Trump’s more recent obsession with the idea of prosecuting Schiff — and the idea that it would be better if we had a “tougher” system like Guatemala — shows that the president’s desire to weaponize law enforcement extends beyond interfering in elections and retribution for people who challenge him at the ballot box. He’s fixated on the idea that he should be able to use his power as president to go after anyone who challenges him politically. It’s an unambiguously authoritarian impulse and more proof that he urgently needs to be removed from office.

We’ve already seen him try this tactic, to apparently limited success. But Attorney General Bill Barr seems committed to running a probe of the Russia investigation, hoping to smoke out wrongdoing by other Trump enemies. Trump may not have gotten his revenge yet, but he’ll keep trying.

And if he’s re-elected in 2020, he’ll feel more emboldened forever. It’s difficult to predict how far he’ll take his authoritarian instincts. We should treat his attitude toward Schiff as a flashing red warning sign that our democracy is at risk.