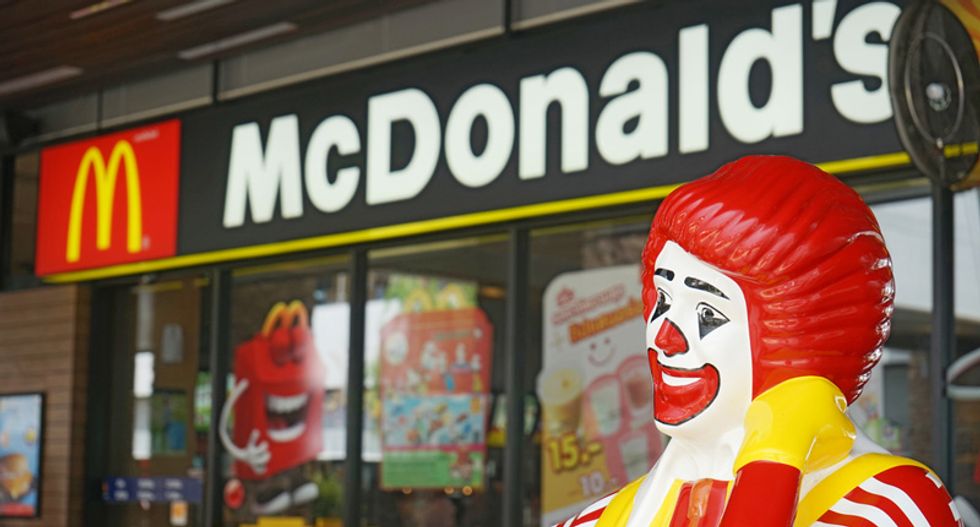 Ronald McDonald sits in front of a McDonald's (Shutterstock)

The owner of a Kansas fast-food restaurant says video evidence proves a police officer wrongly accused an employee of writing a slur on his receipt.

Herington police chief Brian Hornaday shared a photo of the obscene message on Facebook, and complained the McDonald's response was insufficient for the insult, reported KSNT-TV.

“This is what he paid for," Hornaday wrote. "Although I understand this is likely the act of one person and not a representation of the company, when it was brought to their attention the company offered him a ‘free lunch.’ No thank you. A Big Mac and large fries doesn’t make up for it. The US Veteran who continues to serve deserves much more. This is not only bad for McDonald's, but is also a black eye for Junction City.”

The photo showed someone had written "f*cking pig" across a receipt stuck to the officer's cup of coffee -- and Hornaday later reviewed video evidence from surveillance cameras but said officers could not find any evidence.

“Acknowledgment that something was done wrong is kind of what we always want,” Hornaday said. “Whether it’s something like this that happened at McDonald’s or in the criminal justice system.”

But the franchise owner said video evidence proves the message was not written by an employee, and promised to show that evidence to Hornaday on Monday.

“My McDonald’s have the utmost respect for all members of law enforcement and the military and were troubled by the accusation made," said owner Dana Cook. "We thoroughly reviewed our security video from every angle, which clearly shows the words were not written by one of our employees. We look forward to working with Chief Hornaday as he continues his investigation.”