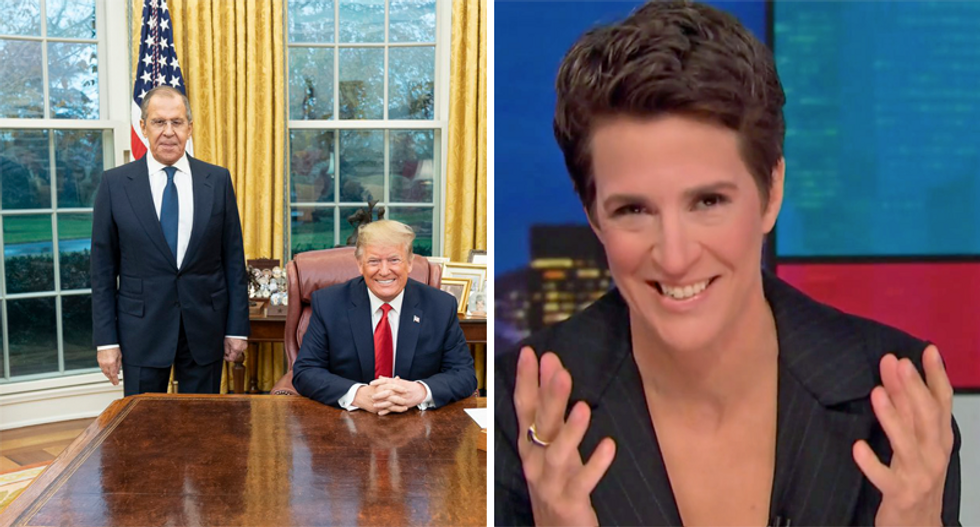 Following the meeting, Lavrov trolled Trump on the issues of foreign election interference and Trump's habit of revealing classified intelligence.

"Given that, given the way the president is being impeached for having done all those things to Ukraine in and way that undermined our alliance with them and specifically their fight against Russian aggression -- which has, you know, led to a five-year-long war in Ukraine -- I mean given the fact he's being impeached for undermining Ukraine in its war against Russia, this is heck of a day to choose to have the Russian foreign minister sitting on your lap in the Oval Office," Maddow said.

The host then corrected herself.

"Okay, not on his lap," Maddow clarified. "At his right hand?"

Maddow also examined the international optics of the meeting.

"So from our perspective, not great, not great timing, not ideal, super awkward," Maddow said.

"But maybe it wasn't the White House who decided this meeting would happen today," she continued. "From the Russian government's perspective, today's timing was perfect."

She read the opening paragraph of an Associated Press story on the meeting.

"The Oval Office meeting with President Donald Trump on Tuesday was the second for Russia’s foreign minister. The president of Ukraine is still waiting for his first," the AP reported.