WATCH: Protester gives Trump the finger at rally as security drags him out over ‘you’re fired’ banner 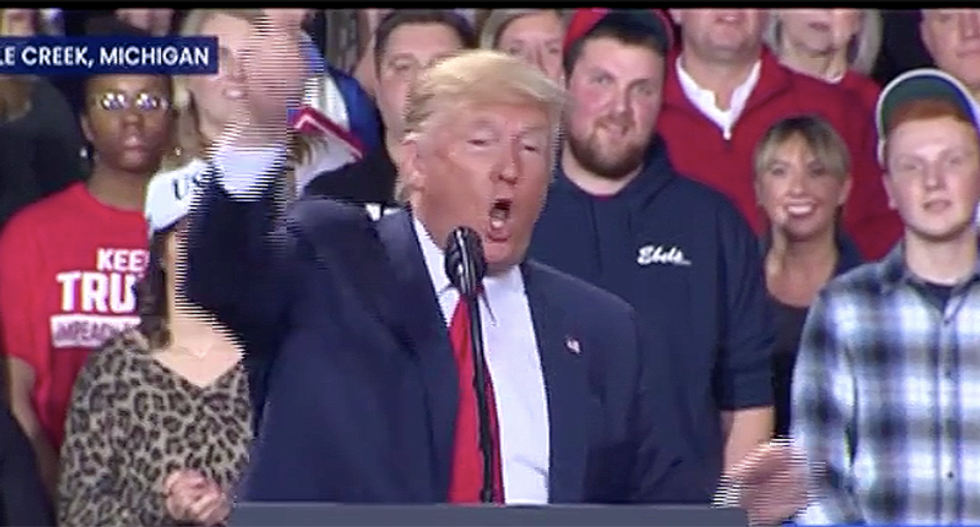 President Donald Trump attacked his security people as they dragged protesters out of his Michigan rally on Wednesday. Protesters flashed middle fingers as well as a giant banner reading, "Don the Con -- you're fired."

"She'll catch hell when she gets back home with mom," Trump said. "You know, she screams a little bit and you know what I like to do to avoid them. Because I'll tell you the big problem, I can hardly hear her. What happens is all of you people go, 'Look, look, look.' And the place -- so there's one disgusting person who made -- wait, wait -- who, I wouldn't say this, but who made a horrible gesture with the wrong finger, right? Now, they won't say that, the fake news media. They won't say it. If one of us did that it would be like the biggest story ever."

"And I'll tell you another thing," Trump continued. "I don't know who the security company is but the police came up, but they want to be so politically correct. So they don't grab her wrist lightly. Get her out! They say, 'Oh, will you please come? Please come with me. Sir. Ma'am. Will you -- and then she gives the guy the finger. Oh. Oh. You gotta get a little bit stronger than that folks."

The finger was not for those dragging the protester out of the area, rather it was for Trump.

Trump has been attacked over the past months for refusing to pay for security bills for his campaign. It's unknown if this security team that Trump attacked Wednesday will get paid.