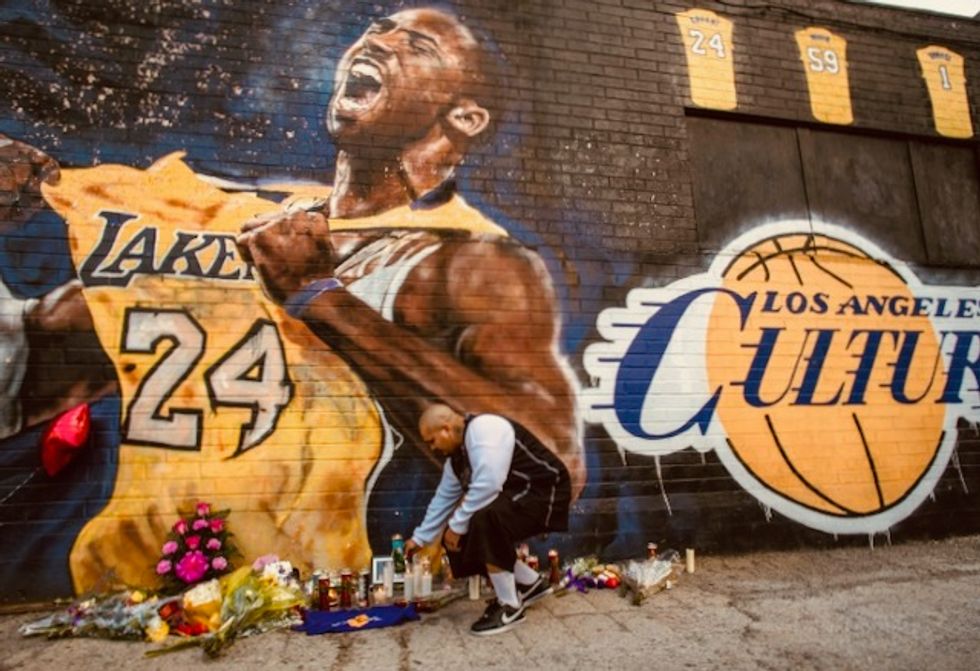 Luis Villanueva lights a candle in front of a Kobe Bryant mural in downtown Los Angeles on January 26, 2020

Rescuers recovered the bodies of all nine victims from a helicopter crash near Los Angeles that killed NBA legend Kobe Bryant, the coroner's office said Tuesday.

Three bodies were retrieved from the scattered wreckage by a special response team Sunday -- the day of the crash. The remaining six were located as the search resumed in rugged terrain Monday, it said.

The remains were "removed from the crash site and transported to the department's forensic science center" for examination and identification, the Los Angeles County coroner's office said in a statement.

Bryant, 41, was traveling with his 13-year-old daughter Gianna and seven other passengers and crew when the Sikorsky S-76 slammed into a rugged hillside in thick fog in Calabasas, northwest of LA.

There were no survivors.

Investigators are "actively working on" identifying the individual remains before officially notifying next of kin.

A five-time NBA champion for his only team, the LA Lakers, and a double Olympic gold medalist, Bryant was widely regarded as one of the greatest basketball players in history.

He was traveling on his private helicopter from Orange County, where he lived, to his Mamba Sports Academy in Thousand Oaks where his daughter was set to play.

Investigators are set to remain at the site of the crash throughout the week to collect evidence, hoping to find clues to what caused the accident that stunned the world.

Jennifer Homendy, a member of the National Transportation Safety Board, described the accident scene as "pretty devastating," with wreckage spread across about 600 feet (180 meters).

Mourning fans on Tuesday placed bouquets of flowers at a makeshift memorial outside the gated community in Newport Beach, south of Los Angeles, where the late NBA great lived.