‘Are you done?’ The View audience goes wild as Whoopi Goldberg cuts off Alan Dershowitz during combative interview 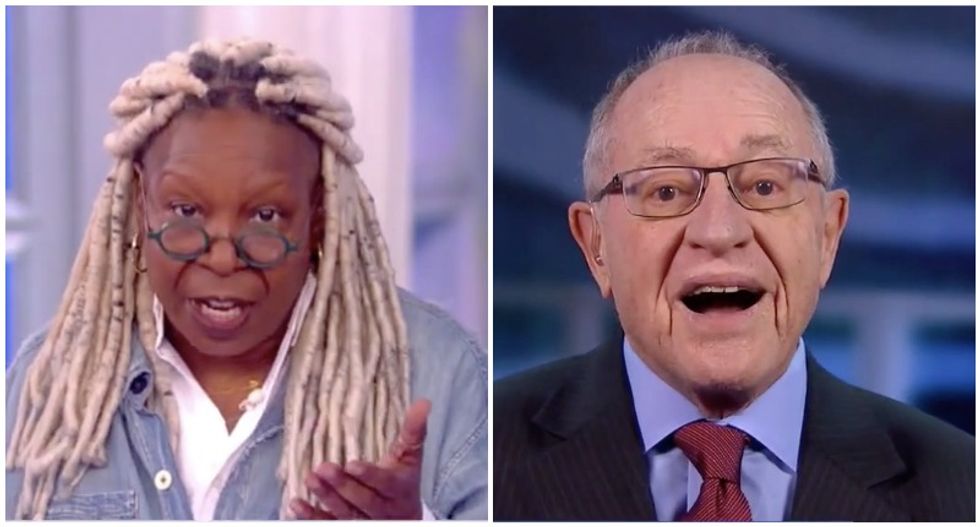 "The View" host Whoopi Goldberg clashed with Alan Dershowitz after he refused to move on from an argument and let the other co-hosts ask questions.

The Harvard Law professor emeritus appeared Wednesday on the daily talk show after defending President Donald Trump from his impeachment trial, where he argued that Democrats had not proven he broke any laws -- which he defined was the standard for conviction by the Senate.

Co-host Joy Behar pointed out that no other legal scholars agreed with his interpretation of the Constitution, and Goldberg cut him off when he cited an 1867 writing by Theodore Dwight, who was then dean of Columbia Law School.

Dershowitz cut in, demanding to finish his point.

"Here's the thing, Alan, you're not going to get any time because you've got four people try to ask you questions," Goldberg said, "so I'm asking you to move faster."

Dershowitz refused to budge, arguing that Dwight agreed with his interpretation of the Constitution, and insisted the army of current legal scholars disagreed because they were politically biased.

"Now the academics all say it isn't -- why?" he said. "Because Donald Trump is being impeached. If Hillary Clinton were being impeached, they'd all be on my side."

Behar dismissed that claim as "baloney," and Goldberg took control of the conversation.

"Are you done -- okay, you're saying you need a crime or criminal behavior," Goldberg said, and Dershowitz interrupted to argue the framers agreed with him. "I'm moving you on or I'm cutting you off, one or the other is going to happen. I don't want to make this contentious but we only have several minutes."

The audience cheered, but Goldberg stopped when she heard Dershowitz laughing over the satellite feed.