"This analysis shows that we're heading in the wrong direction and really need to slow emissions growth from the oil, gas, and petrochemical industries."

Planet-heating pollution from the U.S. oil, gas, and petrochemical industries could rise about 30% by 2025 compared with 2018 because of additional drilling and 157 new or expanded projects "fueled by the fracking boom," an environmental watchdog group warned Wednesday.

That estimated emissions increase is equal to "as much greenhouse gas pollution as 50 new coal-fired power plants," the U.S.-based Environmental Integrity Project (EIP) explained in a statement announcing the new analysis.

The EIP report—titledGreenhouse Gases from Oil, Gas, and Petrochemical Production (pdf)—details recent and potential future emissions from U.S. petroleum and natural gas systems, chemical manufacturing, and oil refineries based on data reported to the Environmental Protection Agency, fossil fuel production projections from the Department of Energy, and permits that companies are seeking or have acquired.

"Facilities in these sectors reported emitting 764 million tons of greenhouse gases (carbon dioxide equivalent tons) in 2018, an eight percent increase since 2016," the report says. "Expected growth in oil and gas production and large new and expanded oil, gas, and chemical plants have the potential to add up to 227 million additional tons of greenhouse gases by 2025."

"That could bring total emissions to nearly one billion tons, equivalent to the greenhouse gas output from more than 218 large coal-fired power plants operating around the clock at full capacity," the report continues, noting that the estimates "likely understate emissions growth from the oil, gas, and petrochemical sectors." 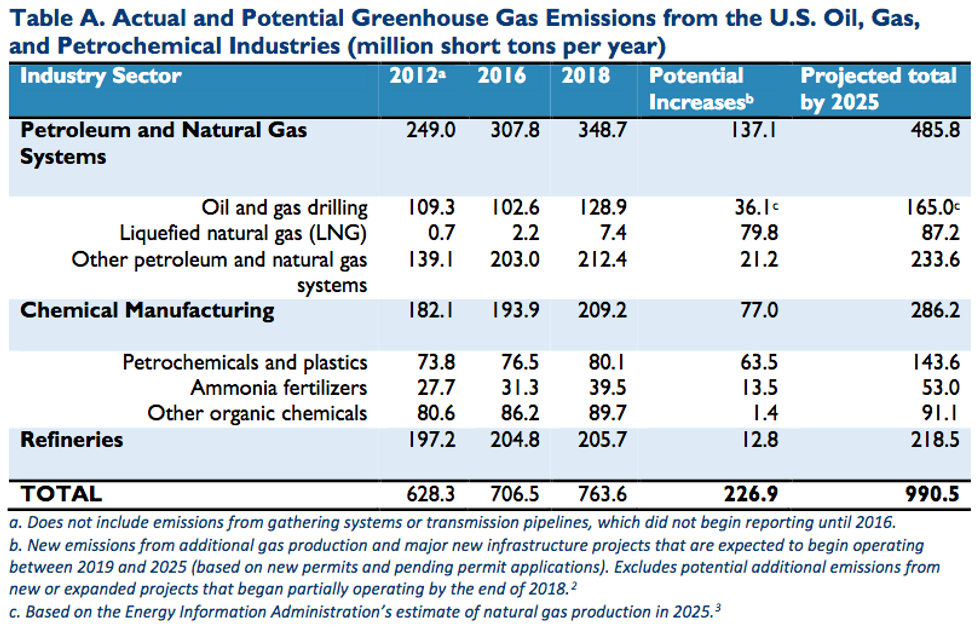 Aided by both the Obama and Trump administrations, the expansion of the oil, gas, and petrochemical industries in the United States continues despite repeated and increasingly urgent warnings from experts that the U.S. fracking boom is threathening ecosystems and making people sick.

Scientists have called for all countries—but particularly the world's wealthiest—to rapidly phase out fossil fuels in favor of 100% renewable energy to prevent the worst impacts of the global climate emergency.

"The U.S. is already struggling to meet climate commitments and transition to a low-carbon future," Courtney Bernhardt, research director at the EIP, said in the group's statement. "This analysis shows that we're heading in the wrong direction and really need to slow emissions growth from the oil, gas, and petrochemical industries."

The report concludes that "the industries responsible for driving fossil fuel extraction and production need to be held more fully accountable for their actions and the consequences of those actions." Its key recommendations are to strengthen permits, improve monitoring and reporting, and increase funding to state environmental agencies.

"Oil and gas production and petrochemical manufacturing are responsible for most of the growth in greenhouse gas emissions today," EIP executive director Eric Schaeffer said Wednesday. "Unfortunately, the permits being issued by states and EPA for the largest projects do not include cost-effective methods for controlling greenhouse gas pollution, even though this is required by the federal Clean Air Act. Unless you think global warming is a hoax, that needs to change."

New Orleans-based Mark Schleifstein reported for The Times-Picayune Wednesday that EIP found the contentious $9.4 billion Formosa complex proposed for St. James Parish would have the highest potential yearly greenhouse gas emissions (13.6 million tons) among all the future and petrochemical and plastics projects included in the analysis.

As Common Dreams reported last month, Louisiana residents and environmental justice groups are fighting against construction of the plant in the region nationally known as "Cancer Alley" because of the area's significant industrial development and the related health impacts on local communities.

Louisiana Department of Environmental Quality spokesperson Greg Langley told The Guardian Tuesday that the state has issued 16 key air quality permits for the project that that essentially clears the way for Formosa to begin construction on the new facility.

In a statement responding to the development Tuesday, Sharon Lavigne, president of the campaign group Rise St. James, vowed to maintain local resistance to the project. "We are fighting to protect our homes and our families from this monster, Formosa," she said. "We are not going to stop because of this bad decision by the state to grant air permits."