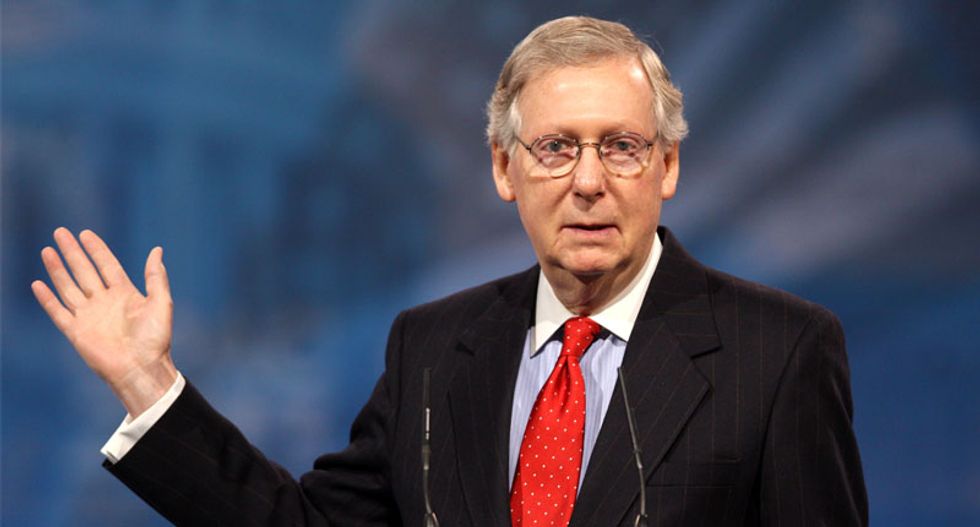 The Kentucky Republican claims the Senate will adopt the same rules as those used in Bill Clinton's impeachment trial, but attorney Paul Rosenzweig -- who helped investigate the case against that president -- says in a new column for The Atlantic that McConnell's offer is disingenuous, at best.

"While it has a patina of reasonableness," Rosenzweig wrote, "the offer is little more than posturing."

While both Clinton and Trump each threw up many roadblocks in their impeachment investigations, Rosenzweig argued that the cases against each president were remarkably different.

The investigation of Clinton into perjury and obstruction of justice charges lasted nine months, and involved nearly 100 witnesses, hundreds of hours of testimony, thousands of documents and, eventually, even testimony and a blood sample from the president himself, after all of his legal defenses were exhausted.

The evidence in that case was so overwhelming that Senate Republicans called only one witness -- Starr himself -- to summarize the case.

A similar procedure might have played out, Rosenzeig argued, if House Democrats had impeached the president based on the voluminous findings in special counsel Robert Mueller's report -- but that's obviously not the case before the Senate.

Trump's pressure scheme against Ukraine was not the subject of a criminal investigation -- as was Clinton's affair with Monica Lewinsky and Trump's campaign ties to Russia -- but was instead was probed only in the House impeachment inquiry, and for less than three months.

The White House blocked many of the key witnesses subpoenaed by House Democrats and refused to turn over documents sought by congressional investigators, and the process moved so quickly that legal battles over those efforts still have not concluded.

"So, unlike with Clinton, the Trump impeachment investigation is incomplete," Rosenzweig wrote. "Far from being given an exhaustive record on which to make a determination, the Senate has received only part of the story from the House."