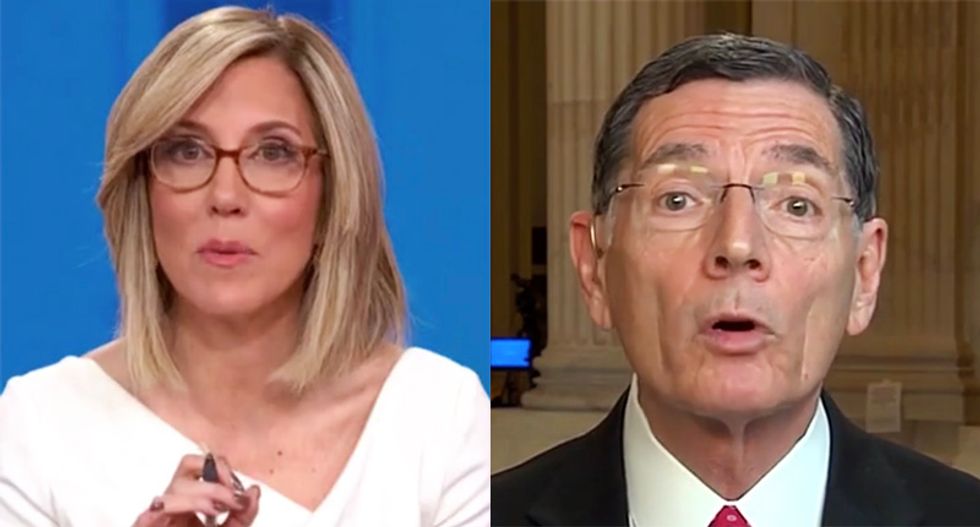 CNN host Alisyn Camerota seemed visibly stunned on Friday morning as a Republican senator spun an elaborate conspiracy theory about Sen. Chuck Schumer by claiming the impeachment trial of Donald Trump is just a cover for the New York Democrat to make himself Senate majority leader.

"You know, Alisyn, what this is about -- and Chuck Schumer has been out front about it -- this isn't about removing the president. It's about Chuck Schumer trying to become the majority leader in the United States Senate," he accused. "He has targeted specific members of the Senate. He has attacked the Senate, the process, the senators [by] running commercials against them."

"That's what this so much of this is about," he continued. "It's not just about removing the president; it's about trying to defeat four Republican senators who are going to be running in 2020 so he is the majority leader. He said so much in the New York Times."

"So you think that everything that is happening in the Senate is about Chuck Schumer, not about why aid to Ukraine was held up?" asked Camerota, who seemed both perplexed and amused.

"Oh, much of it is, absolutely," the Republican senator enthusiastically replied. "This is an effort by the Democrats to take control of the majority of the United States Senate. It's about the 2020 election. I would say let the voters decide, voting is starting next Monday in Iowa, in New Hampshire the week after that."

"People are going to have a chance to vote in November for the president," he continued. "Rep. Adam Schiff said that the 2016 election wasn't legitimate and the 2020 election isn't going to be legitimate. I mean, I don't know who made him the judge and the jury on all of these things."