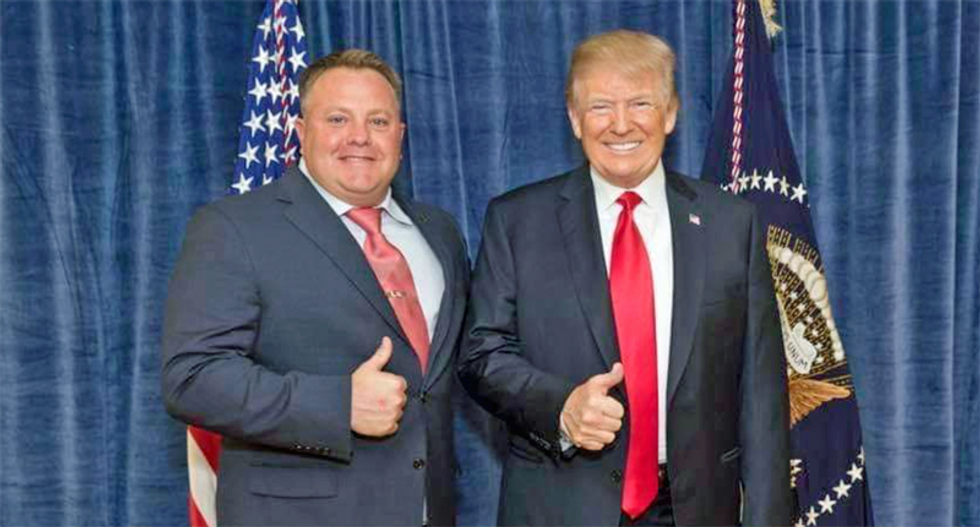 Robert Hyde is a businessman and former marine who's running against Democrat Jahana Hayes for the 5th Congressional seat in Connecticut. He’s the newest entry into the dramatis personae of the Trump-Ukraine saga. Text messages released by the House suggest Hyde was stalking Marie Yovanovitch, the former US ambassador to Ukraine.

Lev Parnas, who turned over the messages, says he never took Hyde seriously. In an interview with MSNBC’s Rachel Maddow, Parnas maligned Hyde’s character, saying he never saw him when he was not drunk. Parnas is one of Rudy Giuliani’s goons. In one way or another, he has been at the center of the president’s conspiracy to smear Joe Biden and rewrite the history of 2016 so that Ukraine, not Russia, is the enemy. Parnas is now under indictment for violating campaign-finance laws. He’s coming forward with what he knows about Donald Trump in an apparent bid for leniency.

Parnas has corroborated with direct material evidence what we already know about Trump’s conspiracy. But we shouldn’t be gullible. When Parnas says he never took Hyde seriously, bear in mind there are few if any moral or legal barriers to this president’s desires. Given his record, it seems plausible, at least, for Trump to have permitted, at least, a goon like Robert Hyde to stalk an ambassador who’s getting in the way of extorting Ukraine’s president in order to defraud the American people.

For his part, Hyde denies having stalked Yovanovitch. On Eric Bolling’s program airing on TV stations owned by Sinclair Broadcast Group, Hyde said he barely knew Parnas. He said they were exchanging “colorful” messages while “smoking a couple of cigars somewhere out in the world.” He told Bolling: “I thought we were playing. I didn’t know he was so serious.” Bolling asked: Did you track Yovanovitch? “Absolutely not,” he said. “Are you kidding me? I’m a little landscaper from fucking Connecticut.”

Turns out the little landscaper from fucking Connecticut spent considerable time in Trump’s entourage and on Trump’s properties. He was prolific on Twitter, posting pictures of himself with well-known Republicans, including Giuliani, Parnas and the president. Emilie Munson is a reporter for Hearst Connecticut Media covering the 5th Congressional race. She asked about the selfies. Hyde was coy, but later sent Munson even more photos of himself with Giuliani, Parnas and Igor Fruman (Parnas’ partner, also under indictment). For two goons saying they barely knew each other, there happens to be lots of photographic evidence suggesting they knew each other.

It turns out the little landscaper from fucking Connecticut has a record of stalking. Eliza Fawcett led a team of reporters from the Hartford Courant to reveal today a Republican consultant won a temporary protective order against Hyde in late May of last year from a Superior Court judge of the District of Columbia for “demonstrating an inveterate pattern of monitoring, tracking and surveilling her location.”

According to Fawcett and her team, court documents show Hyde “kept close tabs” on the woman’s “personal and professional whereabouts” and “would surprise her with unsettling visits” at business events. Over a period of months, Hyde sent her “various forms of social media, text messages and emails,” the woman alleged, “with the intent of instilling fear.” Hyde is also contacted her clients. The woman, whom the Courant did not identify for her safety, “became a dysfunctional disaster” who suffered from “extreme and prolonged fear, harm, continued emotional distress,” per court papers.

From January to April, Hyde stopped contacting the woman. It was during this time, he contacted Lev Parnas via Whatsapp about Yovanovitch. “If you want her out, they need to make contact with security forces.” “They are willing to help if we/you would like a price.” “Guess you can do anything in the Ukraine with money ... what I was told.” “Wow. Can’t believe Trumo [sic] hasn’t fired this bitch. I’ll get right in [sic] that.”

On his return, he ambushed the woman on April 1. He waited for her to finish dinner at the Trump Hotel in Washington. In May, she canceled a trip to Trump’s Doral resort in Miami knowing Hyde would be there. Also in May—and this is somewhat curious—the Republican National Committee called “to tell me they believe I am in danger.” By the end of the month, the woman had won a temporary protective order against Hyde.

It’s one thing to say he wasn’t serious about stalking Yovanovitch. It’s another to say he’s wasn’t serious while having done that very thing back home. Criminals, it turns out, will “joke” about committing crimes before the moment they commit them.

As for Trump, no one is saying he knew about Hyde stalking Yovanovitch, but Lev Parnas is saying the president was aware of everything he was doing to smear Biden and defraud the American people. The president might not have said yes to stalking. But he might not have said no either. After all, Trump said in his phone call with Ukraine’s president, Marie Yovanovitch was “going to go through some things.”