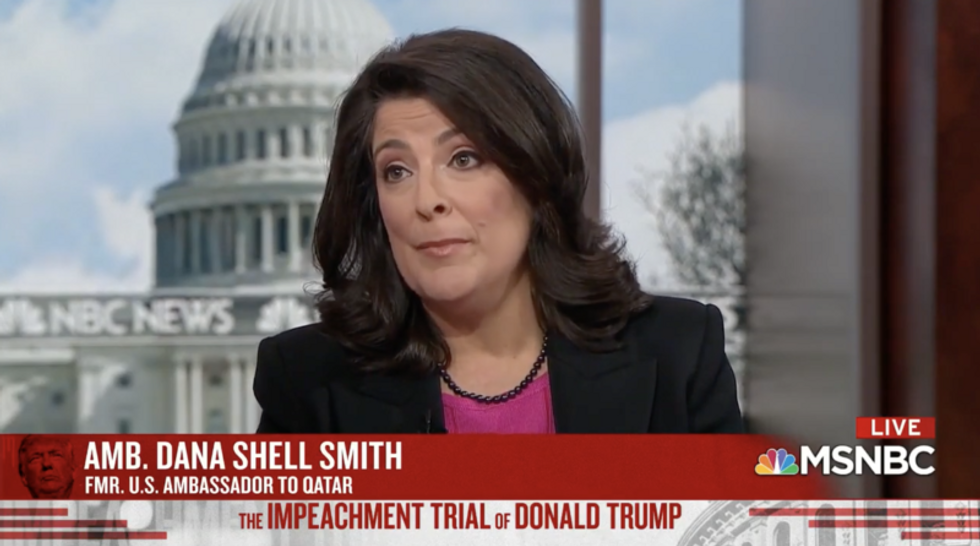 Addressing reports surrounding the "crisis of morale" Secretary of State Mike Pompeo's reported "silence" is creating in the State Department regarding the White House's pressure campaign on Ukraine to investigate President Trump's political rivals, former US Ambassador to Qatar, Dana Shell Smith, told MSNBC's Andrea Mitchell this Friday that Pompeo's silence is "demoralizing to his own department" and a "complete dereliction of his duty."

"He has a responsibility to stand up for his people, which I'm sure he learned at West Point," Smith said, referring to the firing of former US Ambassador to Ukraine, Marie Yovanovitch.

Mitchell then played a clip from a radio interview where Pompeo claimed he never met Rudy Giuliani associate Lev Parnas, and mentioned Ukraine's investigation into an alleged surveillance campaign against Yovanovitch conducted by one of Giuliani and Parnas' associates.

"Just on the face of it, Mike Pompeo has not said anything publicly about [Trump's phone call with Ukrainian president Volodymyr Zelensky] where he said [Yovanovitch] is a bad person and bad things will happen to her," Mitchell said, pointing out that it took Pompeo "several days until being questioned in Italy to even acknowledge that he was listening into that call."

"That's true," Smith replied. "And not only has he been completely absent on the issue, but the State Department under his leadership has not turned over a single responsive document to the House Foreign Affairs Committee ... I mean, frankly, anything Pompeo says on the radio, to me, it's irrelevant until they start responding to the inquiry."