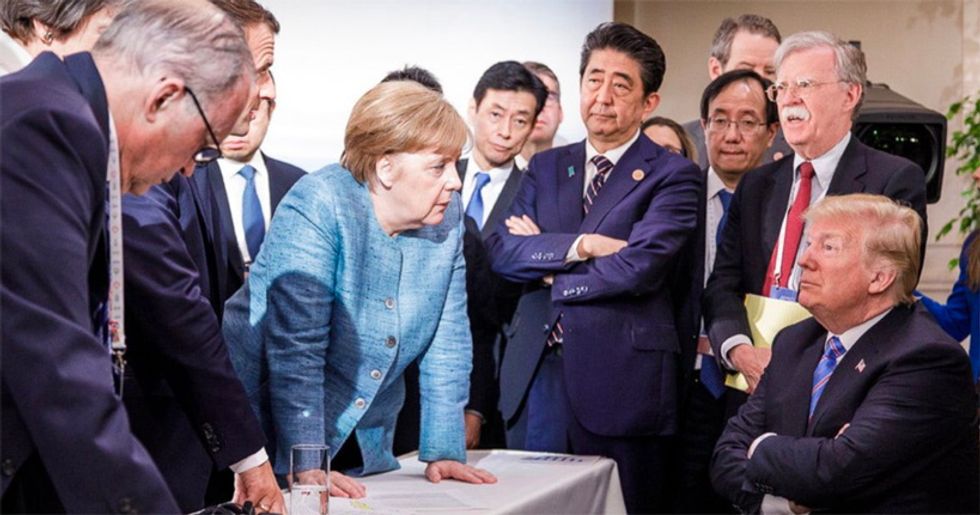 In a commentary for the conservative Bulwark, Shay Khatiri notes that Donald Trump is not getting much in the way of support from world leaders after the killing of Iranian military leader Qassem Suleimani -- even though he was the enemy of many European nations too -- in part because the American president has alienated U.S. allies during his three years in office.

As the president has ratcheted down war talk with Iran, much to the world's relief, foreign leaders are staying out of the fray, with some being openly critical of Trump.

"Hundreds of European combatants died during the Iraq War. As a percentage of their population, the United Kingdom deployed more troops per citizen to Iraq than any other country, including the United States. Spain and the Netherlands deployed 1,300 troops each, Italy 3,200, and South Korea 3,600. Australia’s 2,000 troop contribution might look small, but it was 5 percent of the country’s active-duty personnel. The list goes on," Katari writes. "And yet, despite the fact that our allies had an interest in seeing Soleimani dead, their responses have been muted, at best. Why? Because they neither trust Donald Trump to act prudently throughout escalation, nor like the man."

Pointing out that diplomats have urged President Trump to not escalate the conflict after a military base was hit by missiles in retaliation, the report notes that the only support Trump has received from overseas has come from the UK's Boris Johnson who "said that he doesn’t 'lament' Soleimani’s death."

"Japanese Prime Minister Shinzo Abe’s response was probably more unequivocal. Abe had been trying to mediate between the United States and Iran, and he said that he was 'humiliated' by the strike," Khatiri adds.

"Thus far, there are no reports of any direct talks about the Soleimani operation between Trump and foreign leaders. But Vladimir Putin is trying to make the most out of the situation by driving a wedge between the United States and its allies. He has invited German Chancellor Angela Merkel to Russia to talk about the situation and had a phone call with French President Emmanuel Macron about the matter," he writes. "Who would have thought that three years spent constantly antagonizing America’s allies would result in those allies’ being not as helpful as America wishes?"

"In the conduct of the Soleimani operation itself, Trump treated our allies with contempt. The British foreign secretary says that he found out about the strike from the news. This was an operation that could have put British and other European citizens and diplomats in the region at risk and Trump did not even give Boris Johnson’s government a heads up?" he noted. "When it comes to Iran, nearly every action from this administration has been carried out over the objections of our European allies."

Khatiri explains, "Geopolitics, like all politics, is a team sport and requires making compromises. America cannot delegate its national interest to Europe, but neither can it affront out allies without imposing costs. Allies often need to compromise with one another, and goodwill and niceties go a long way in making these compromises less painful. Alliance management is one of the most, if not the most, difficult task in diplomacy. Donald Trump’s 'to hell with allies' and 'why are our allies not more helpful' brand of diplomacy doesn’t actually put America first. It makes America’s strategic situation more dangerous and uncertain."

"Trump’s administration has been incapable of making meaningful compromise with America’s allies and now, at a moment of instability, our allies are nowhere to be found. That’s bad enough. What’s worse is that our president and his secretary of State seem surprised," he concluded.