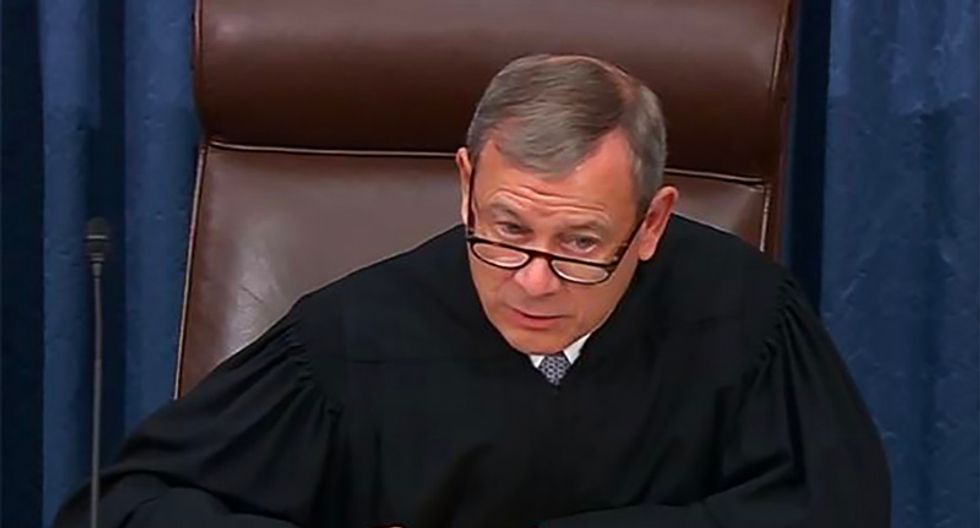 Following a New Times report that stated "President Trump directly tied the withholding of almost $400 million in American security aid to investigations that he sought from Ukrainian officials, according to an unpublished manuscript of a book that John R. Bolton, Mr. Trump’s former national security adviser, wrote about his time in the White House," the three took to the Times editorial page to implore Roberts to step in.

"The Senate rules for impeachment date back to 1868 and have been in effect since that time. They specifically provide for the subpoenas of witnesses, going so far in Rule XXIV as to outline the specific language a subpoena must use — the 'form of subpoena to be issued on the application of the managers of the impeachment, or of the party impeached, or of his counsel,'" the three wrote. "As you can see, there is no 'Senate vote' requirement whatsoever in the subpoena rule. A manager can seek it on his own."

With that in mind, they claimed that the door is open for Roberts to jump in by stating, "The framers’ wisdom in giving this responsibility to a member of the judiciary expected to be apolitical and impartial has never been clearer."

"With key Republican senators having told the American people that they prejudged the case against President Trump before it began and even working with Mr. Trump’s lawyers to build the very defense for which they’re supposed to be the audience, the notion that they’re doing the 'impartial justice' they’ve sworn to do is very much in question," they reminded the Supreme Court jurist.

"Mr. McConnell’s rules separately say that the Senate shall debate 'whether it shall be in order to consider and debate under the impeachment rules any motion to subpoena witnesses or documents.' " they continued. "That language cannot restrict Rule V’s pre-existing empowerment of the chief justice to issue subpoenas. To amend Rule V requires a two-thirds vote of the Senate, something Mr. McConnell didn’t get. That is presumably why the rules speak only to whether the Senate should subpoena witnesses or documents — but do not restrict the chief justice’s ability to issue subpoenas under his Rule V authority. And that’s precisely what the Democrats must ask him to do — now."

Fringe conservative Steve Bannon announced that the 2023 Republican agenda, should they win the House and Senate back in 2022, will be to impeach and arrest President Joe Biden.

Speaking on his radio show, Bannon explained that it was all because of what was happening at the southern border of the U.S. and Mexico.