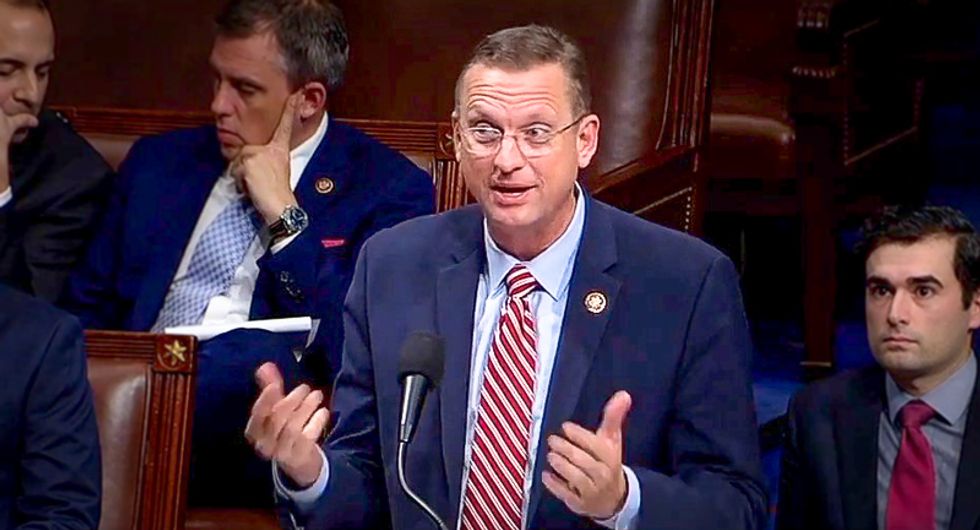 Rep. Doug Collins (R-GA) on Friday apologized for accusing Democrats of being "in love with terrorists" -- much to the chagrin of many Trump supporters who howled with rage at him for supposedly caving to the liberal "mob."

However, Collins's apology came just 45 minutes after he sent out a fundraising email with the header, "I Will Not Apologize."

"I'm sick of it," Collins wrote in his email. "Our president acted to secure our nation, and we should not be ashamed or apologize for putting America first."

He then asked for "10,000 patriots" to "stand up in defense of President Trump" by sending money to Collins's campaign.

Collins earlier this week took a lot of flack for saying that Democrats "are in love with terrorists," most notably from Iraq War veteran Sen. Tammy Duckworth (D-IL), who angrily shot back that she “left parts of my body in Iraq fighting terrorists."

Ted Cruz faces backlash after telling Texans to 'stay warm' during storm: 'Are you going to Cancun'

Critics of Sen. Ted Cruz (R-TX) pounced on Wednesday after he advised his constituents to stay warm during unexpectedly cold weather.

Writing on Twitter, Cruz noted that "most Texans woke up to freezing rain and sleet that will continue throughout the day" before telling his fellow Texans to "stay inside, warm, and off the roads if possible."

After tanks, Ukraine allies under pressure to send warplanes

While the United States has for now ruled that out, a few European nations appear more open to the idea.

In 2015, as his first presidential campaign took shape, Trump was falsely hailed by some LGBTQ Republicans as being "pro-gay." In 2016, for a short while, Trump said transgender people should “use the bathroom they feel is appropriate,” although less than 24 hours later he reversed course. But that same year he merged two powerful culture war issues, LGBTQ rights and illegal immigration, into a combined wedge issue to attack his Democratic opponent.