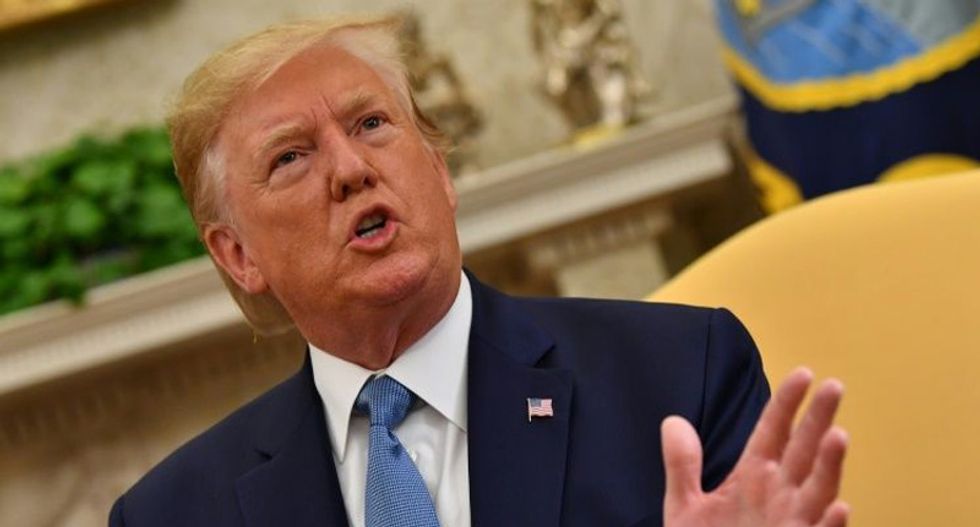 For Donald Trump, the personal certainly is the political.

He has shown himself to be a malignant narcissist. He is an egomaniac. Trump's personal obsessions drive most if not all of his behavior. He has no conception, care or concern for most other people.

Trump's personal and political brand is grievance-mongering and a false narrative of white victimhood. This won Donald Trump the White House and remains the bedrock of his political cult and popularity.

Trump is obsessed with personal slights. As such, like a king, emperor or mob boss, he is fixated on the absolute fealty of his minions. As many of the country's leading mental health experts have pointed out, Trump is extremely insecure. This in turn fuels his bullying and anti-social behavior.

The personal is the political for Donald Trump in the most base and crude ways as well. During the 2016 presidential campaign he repeatedly talked about menstruation as a way of suggesting that women are unpredictable, hyper-emotional and irrational.

Both as an insult to his male rivals and a boast about himself, Trump has publicly bragged about the size of his genitals. He appears fixated on human waste and toilets. As such, his politics are scatological and infantile.

Such themes are the basis of Trump's 2020 re-election campaign. This is a common feature of right-wing authoritarian movements and their faux "populist" appeal. Historian Ruth Ben-Ghiat explained this in a recent conversation with Salon: "That is the personality cult. For Trump's rule to work — as with Putin and other autocrats and authoritarians — the leader must be both an everyman and a superman. The leader is a populist in the sense that he speaks the 'language of the people.' Almost all of these types of leaders have a sense of humor where they make crude jokes that get people to laugh. Politically incorrect jokes. Their humor is corrosive, of course. But the jokes work in showing that these types of leaders are very much of the people."

"I'm also approving new dishwashers that give you more water, so you can actually wash and rinse your dishes without having to do it 10 times – four, five, six, seven, eight, nine, 10," he said, likely attacking Department of Energy regulations.

"Sinks, toilets and showers, you don't get any water. They put restrictors on and now they made them permanent.

"You go into the shower — and I have this beautiful head of hair, I need a lot of water — and you turn on the water [and] drip, drip, drip. I call the guy, 'something wrong with this?' 'No, sir, it's just the restrictor'. So you're in there five times longer than you're supposed to be, you use probably more water and it's a very unpleasant experience. We're getting rid of the restrictors, you're going to have full shower flow, full sink."

Our president also has a special obsession with dishwashers. "Remember the dishwasher?" he asked, as if it were a relic of the past. "You'd press it, boom! There'd be, like, an explosion. Five minutes later you open it up, the steam pours out … Anybody have a new dishwasher? I'm sorry for that." Trump also told his almost all-white crowd that their "dishes will be beautiful" because of his presidency.

Is this an effective political strategy for winning the 2020 presidential election?

Trump's public opinion polls and other data suggests it may be. Despite impeachment, numerous scandals and many other failures of governance and leadership, Trump remains remarkably popular among his supporters. He continues to have the largest built-in base of support in the history of modern public opinion polls. Trump's strategy is based on motivating his followers, not on expanding that core of support.

But Trump's toilet-politics strategy is not some form of three-dimensional chess. Nor are such appeals an example of Trump and his handlers' political genius or sophistication. Trump is simply channeling the personal as the political in a very basic way.

Trump's toilet politics are intimate, tangible, real, immediate and visceral for his cult members. They can flip a light switch and see that their new bulbs are not as bright or pleasing to the eye. Trumpists can look at the waste in their toilets and become frustrated that their excreta do not swirl down the bowl in as pleasing a way as previously.

In a world where they feel disempowered and confused by the complexities of social and political life in the 21st century, their Great Leader is offering them something tangible that they can both understand and control. As political scientists have repeatedly demonstrated since at least the 1950s, the American public is largely non-ideological and unsophisticated, and lacks any systematic understanding and knowledge of public policy. Modern conservatism is also anti-intellectual. In addition, the United States is afflicted with a lack of civic literacy, aided by a failing educational system that does not teach critical thinking or what it means to be a responsible democratic citizen.

This obsession with "cleanliness" is also an element in why Trump's supporters and other right-wing conservatives and authoritarians are hostile to nonwhite migrants and refugees from Latin America, as well as to nonwhites more generally. Historically and through to the present, nonwhites in America have been stigmatized and stereotyped through the white gaze as somehow being "dirty", "unclean" or, in the most extreme version, "invaders" and a human form of pollution. Trump and the right-wing media make frequent and deliberate use of that language and imagery in their white identity politics campaign against the equal human and civil rights of nonwhite people, both in America and around the world.

Some examples: Black and brown cities such as Chicago and Baltimore are "dirty" and "dangerous"; nonwhite migrants and refugees are "snakes", "rats" or other vermin.

Trump's toilet politics are also symbolic. They are a tool for leveraging "political correctness" and the notion that "those people" (experts, the college-educated, big city "liberals," "big government") are telling "us" (Trumpers, conservatives, white right-wing Christians, red state America) what to do.

Hillary Clinton, by contrast, epitomizes the dorky arrogance and smugness of the professional elite. The dorkiness: the pantsuits. The arrogance: the email server. The smugness: the basket of deplorables. Worse, her mere presence rubs it in that even women from her class can treat working-class men with disrespect. Look at how she condescends to Trump as unfit to hold the office of the presidency and dismisses his supporters as racist, sexist, homophobic, or xenophobic.

Trump's blunt talk taps into another blue-collar value: straight talk. "Directness is a working-class norm," notes [Alfred] Lubrano. As one blue-collar guy told him, "If you have a problem with me, come talk to me. If you have a way you want something done, come talk to me. I don't like people who play these two-faced games." Straight talk is seen as requiring manly courage, not being "a total wuss and a wimp," an electronics technician told Lamont. Of course Trump appeals. Clinton's clunky admission that she talks one way in public and another in private? Further proof she's a two-faced phony.

Manly dignity is a big deal for working-class men, and they're not feeling that they have it. Trump promises a world free of political correctness and a return to an earlier era, when men were men and women knew their place. It's comfort food for high-school-educated guys who could have been my father-in-law if they'd been born 30 years earlier. Today they feel like losers — or did until they met Trump.

While Donald Trump entertained and excited his supporters with his toilet politics performance in Milwaukee, the Democrats held another 2020 presidential primary debate, the last before the Iowa caucuses.

The debate was boring. There was an effort by the political horse-race types to gin up controversy about Bernie Sanders supposedly telling Elizabeth Warren that a woman could not be elected president. Such "he said, she said" arguments are a distraction from the central issue of how best to defeat Donald Trump.

Yes, the Democratic candidates may have engaged in an intelligent discussion of important matters of public concern — but there was nothing compelling about their discussion that was likely to move undecided voters or non-voters in a significant way. And yes, any of the remaining Democratic candidates would be a far better president than Donald Trump or any other potential Republican candidate.

The Democratic nominee, whoever it may be, will almost certainly beat Donald Trump in the popular vote. He or she may do this easily. Unfortunately for America and the world, Trump commands a core group of ignorant, nihilistic voters in key states who will vote for him no matter what. Trump's toilet politics are part of the appeal.

Our country needs a more intelligent and better informed electorate, one capable of taking on complex issues such as climate disaster; resource scarcity; the revolutionary economic changes caused by robots, AI and algorithms; social inequality; the rise of China as a peer competitor to the United States and many other matters. Instead it has Trumpism, a dumbing down of the American public rather than its elevation.

To those outside Trump's political cult, his toilet politics seem buffoonish and stupid. For those inside his cult, it is gospel. That divergence is why Trump's critics have consistently underestimated his power and durability. Again, that failure to understand the appeal of Trumpism is why those same critics, analysts and pundits will likely be watching him win re-election in November, with their mouths agape and their spirits broken.