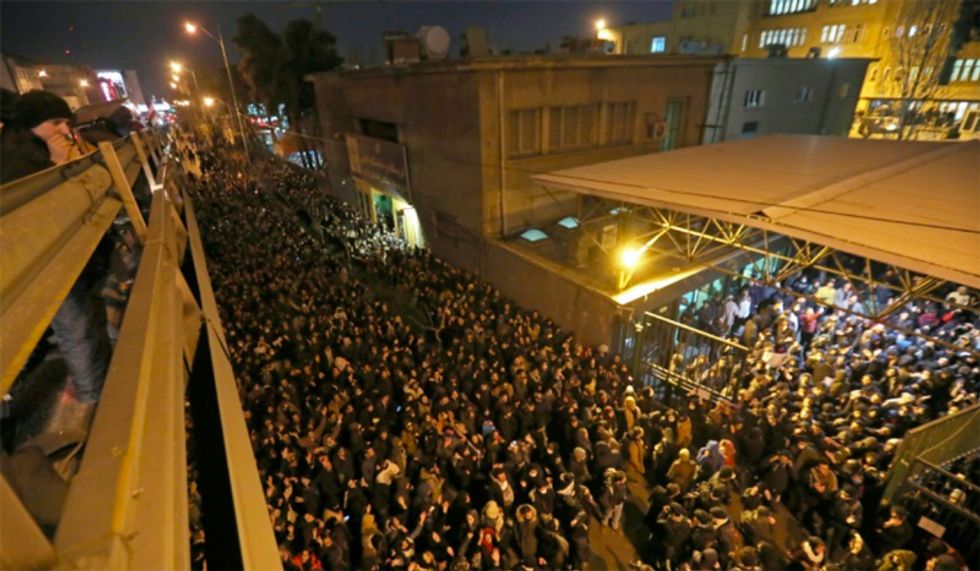 Iran on Tuesday announced its first arrests over the shooting down of a Ukrainian airliner in Tehran last week, after a third night of angry protests over the disaster.

The Ukraine International Airlines plane was brought down by a missile shortly after takeoff on Wednesday, killing all 176 passengers and crew on board.

Tehran for days denied Western claims based on US intelligence that the Boeing 737 had been downed by a missile.

It came clean on Saturday when Revolutionary Guards aerospace commander Brigadier General Amirali Hajizadeh acknowledged a missile operator had mistaken the plane for a cruise missile and opened fire independently.

At a televised news conference, the judiciary announced the first arrests had been made over the blunder, without specifying how many.

"Extensive investigations have been carried out and some people have been arrested," said spokesman Gholamhossein Esmaili.

The announcement came shortly after President Hassan Rouhani said everyone responsible for the disaster must be punished.

"For our people it is very important in this incident that anyone who was at fault or negligent at any level" face justice, Rouhani said.

"The judiciary must form a special court with a high-ranking judge and dozens of experts... The whole world will be watching," Rouhani said.

"It cannot be that only the person who pressed the button is at fault. There are others, and I want this to be explained to the people explicitly."

Iran has come under mounting international pressure to ensure its investigation into the tragedy is full and transparent.

The authorities' handling of the air disaster has also angered Iranians.

Videos posted on social networks on Monday purported to show protesters taking to the streets for a third consecutive day, with demonstrators apparently shouting slogans against the Islamic republic.

The Kiev-bound plane was shot down at a time when Iran's armed forces were on heightened alert after launching a volley of missiles at Iraqi bases housing US troops.

Iran fired the missiles in retaliation for a US drone strike that killed Qasem Soleimani, the head of the Revolutionary Guards' foreign operations arm, on January 3.

Addressing that issue on Tuesday, Rouhani said while "the root of all sorrows goes back to America... this cannot be a reason for us not to look into all the root causes" of the air disaster.

The president also demanded officials explain why it took so long for authorities to announce the real cause of the air disaster.

"But more important than anything else, in my opinion, is that our people must be assured that this incident will not be repeated."

Iran has invited experts from Canada, France, Ukraine and the United States to take part in the probe.

On Monday night, Canada's Transportation Safety Board said its investigators flying to Tehran would be granted access to the wreckage and black box flight recorders of the downed airliner.

"There have been early signs that Iran is allowing the TSB to play a more active role than is normally permitted," its chair Kathy Fox told a news conference.