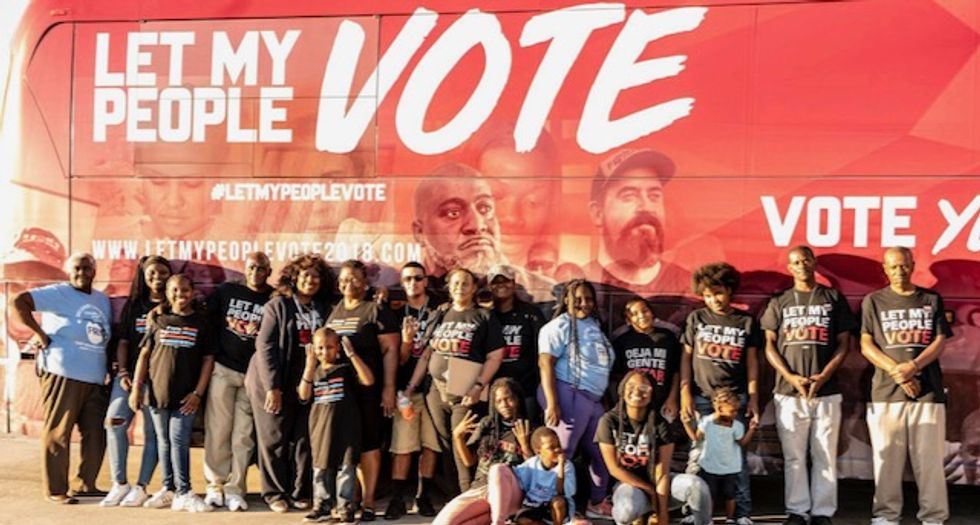 "Florida cannot violate the U.S. Constitution's protections. The right to vote cannot be contingent on the ability to pay."

Florida's state Supreme Court on Thursday ruled in favor of denying convicted felons the right to vote if they do not pay fines and fees associated with their incarceration, a decision that was immediately assailed by rights activists as an unconstitutional and immoral poll tax.

In a statement condemning the ruling (pdf), the American Civil Liberties Union (ACLU), ACLU of Florida, Brennan Center for Justice at NYU School of Law and NAACP Legal Defense and Educational Fund said the ruling "does not—indeed, cannot—alter what the U.S. Constitution requires."

"A federal court has already held that the state cannot deny people the right to vote because of their inability to pay financial obligations," the groups said in their statement.

The court ruled that "all terms of sentence" in the law included fines and fees because they are included in "any portion of a sentence that is contained in the four corners of the sentencing document."

Felons in Florida had their right to vote once restored by public ballot "upon completion of all terms of sentence including parole or probation" in 2018, but the state's GOP-led government has worked to undermine the right.

As Common Dreams reported, the state GOP in 2019 passed legislation implementing the modern-day poll tax—drawing criticism from progressive groups and rights advocates. The court's affirmation of the legality of the law is the latest step in the process of reversing the initiative.

Kira Lerner, a journalist with The Appeal—referring to her reporting with Daniel Nichanian in July 2019 on earlier attempts to re-disenfranchise Florida felons—noted that financial obligations from the sentencing documents make up a small amount of the owed fines.

"Carlos Martinez, the elected public defender in Miami-Dade, told us he estimates that financial obligations are not listed on the sentencing documents for 90 percent of people with outstanding fines and fees in the county," said Lerner.

However, as Nichanian and Lerner pointed out, that is open to the discretion of the counties.

"This interpretation is up to the individual counties and we're likely to see a broader interpretation and more disenfranchisement in more conservative counties," Lerner said.

The bottom line, said the ACLU and affiliated groups, is that the policy represents an unconstitutional poll tax.

"Florida cannot violate the U.S. Constitution's protections," the groups said in their letter. "The right to vote cannot be contingent on the ability to pay."

by
Eoin Higgins, staff writer
2020 Election
Report typos and corrections to: corrections@rawstory.com.
Like this article ? Text `Support` to 50123 to donate.
READ COMMENTS - JOIN THE DISCUSSION