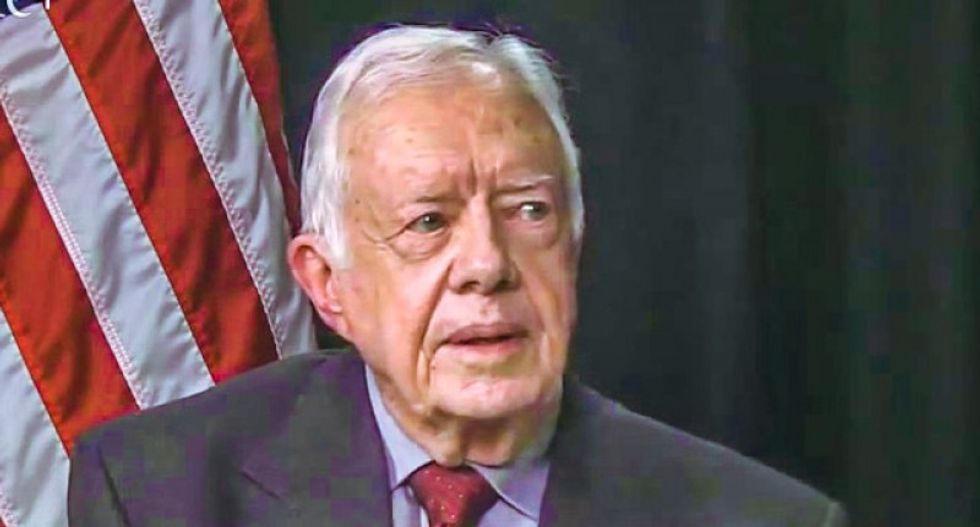 "The new US plan undercuts prospects for a just peace between Israelis and Palestinians," the former US president said in a statement.

"If implemented, the plan will doom the only viable solution to this long-running conflict, the two-state solution," said Carter, who brokered the landmark 1978 Camp David Accords that brought peace between Israel and Egypt.

He urged UN member-states "to adhere to UN Security Council resolutions and to reject any unilateral Israeli implementation of the proposal by grabbing more Palestinian land."

His office said in a statement that Trump's plan, unveiled Tuesday, "breaches international law regarding self-determination, the acquisition of land by force, and annexation of occupied territories."

"By calling Israel 'the nation-state of the Jewish people,' the plan also encourages the denial of equal rights to the Palestinian citizens of Israel," it said.

Trump presented his long-awaited plan Tuesday alongside Israeli Prime Minister Benjamin Netanyahu, his close ally, who shortly afterward signalled he would seek to annex a large part of the West Bank.

Trump's plan recognizes Israeli sovereignty over most of its West Bank settlements and the Jordan Valley, as well as an undivided Jerusalem.

The plan also backs a Palestinian state with a capital on the outskirts of Jerusalem but says the Palestinian leadership must recognize Israel as a Jewish homeland and agree to a demilitarized state.

The 95-year-old Carter, the longest-living president in US history, has frequently spoken out since losing re-election in 1980 and has won the Nobel Peace Prize for his humanitarian work.

In his recent years, he has frequently faced criticism from pro-Israel supporters for his views on the conflict, especially his use of the word "apartheid" to describe the Jewish state's potential future without a peace deal.