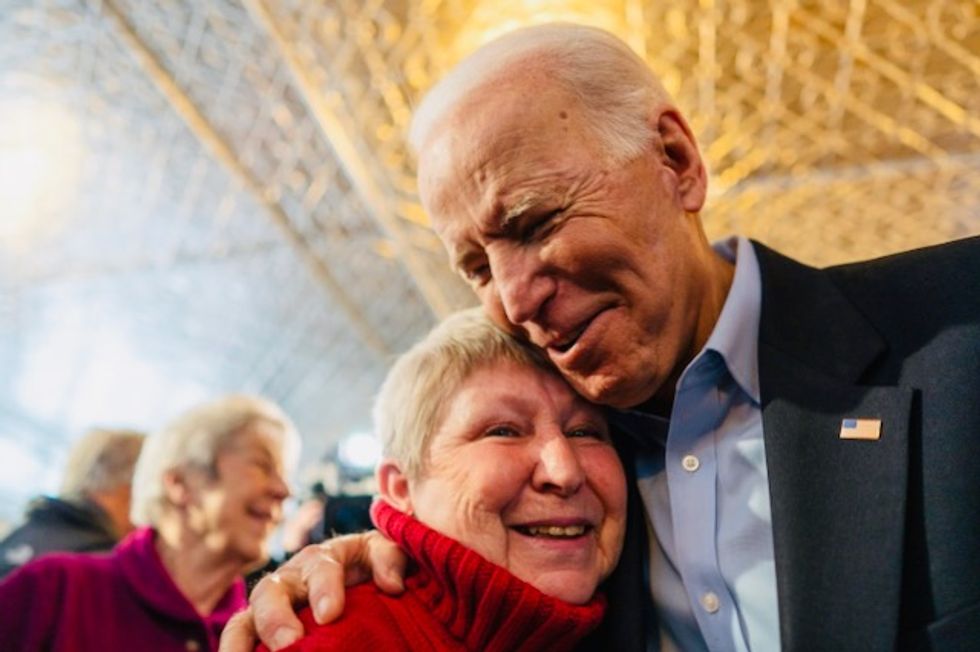 All eyes are on the snowy, sparsely-populated state as 11 White House contenders battle for early momentum in the race to see who challenges Trump in November's election.

Indiana ex-mayor Pete Buttigieg and Senator Elizabeth Warren follow, with Senator Amy Klobuchar further back but still in the mix.

The 77-year-old national frontrunner Biden, Buttigieg, 38, and tech entrepreneur Andrew Yang, 45, in the second-tier but gunning for a surprise showing, have launched whistlestop tours to press the flesh.

Each has several Iowa events Friday and they are capitalizing on their rivals' absence. Sanders, Warren, Klobuchar and Michael Bennet were in Washington, bound by their duty to sit in judgment of Trump.

In a twist of political fate, the very process that each of them hoped would conclude with Trump's removal has deprived them of critical campaign time.

Compounding the uncertainty, nearly half of Democratic Iowa voters remained undecided barely 72 hours before Monday's caucuses, the local meetings where participants align behind their candidates in one of the country's quirkier voting systems.

Among them is Stephanie Hull, a 21-year-old student who came to see Biden in the small town of Burlington, on the banks of the Mississippi River.

"It's a possibility" that president Barack Obama's White House wingman earns her vote, she told AFP.

"I have a few other favorites right now so it's going to be down to the wire."

The attentive crowd, on average notably older than Hull, warmly welcomed Biden, who entered the community event with little flourish before delivering a half-hour stump speech including his campaign's key takeaway: "the soul of the nation" is at stake.

Biden, whose global experience is unmatched among the candidates, has declared Trump a danger to America due to his erratic foreign policy.

"The next president of the United States is going to inherit a country that's divided and a world in disarray," Biden told attendees.

"There's going to be no time for on-the-job training."

Biden's readiness to command the world stage appeals to Christina Carter, 54, a Burlington high school teacher who is also undecided.

"I really like him, and... he has eight years' experience with a president that I truly adore," she said.

The Obama connection helps explains Biden's popularity among Democrats. He has defied forecasts and remained atop national primary polling for the past year.

Biden's blue-collar roots and his uncanny ability to connect personally with voters are huge assets, although his Iowa speeches have lacked the passion that animates some rivals.

Despite the agonizing over which political approach to take -- revolution or realism -- in the 2020 election, Iowa's Democratic Party chairman Troy Price said voters have unified around one goal.

"There's a lot of people that want to make sure that we defeat Donald Trump," Price said.

Like Biden, Buttigieg crisscrossed Iowa Friday, focusing in large part on communities that voted for Trump in 2016 -- and arguing that he, unlike the older frontrunners, is the future-forward candidate who can unite the country after four years of bitter divisions.

"We've got to galvanize, not polarize," he said Thursday in Decorah.

As Democrats scramble, Trump jetted into Iowa Thursday to put his thumb on the scales, holding a rowdy rally in Des Moines and lashing out at "Crazy Bernie" and "Sleepy Joe."

AFP / Gal ROMA Chart showing support for top candidates in the US Democratic presidential nomination race as of Jan 31, 2020, according to the RealClearPolitics polling average

Trump mercilessly mocked the radical left-leaning approach from candidates like Sanders, who advocates for universal health care and tuition-free college.

"The Democrats will lose because America will never be a socialist country," he said to loud cheers.

Meanwhile, the senator candidates were forced to scrap their attendance at Friday events in Iowa, leaving surrogates to campaign in their stead.

The GOP-led Senate was to vote Friday on whether witnesses should testify at Trump's trial, but it appeared likely that Republicans would block the effort, possibly leading to an acquittal vote in coming days.

"I have a job to do and I hope the people of Iowa and beyond will understand that my experience matters," she tweeted. "Being in the arena matters."