John Roberts caused a ‘crisis of democratic legitimacy’ -- it’s ‘entirely fitting’ he has to preside over his mess: columnist 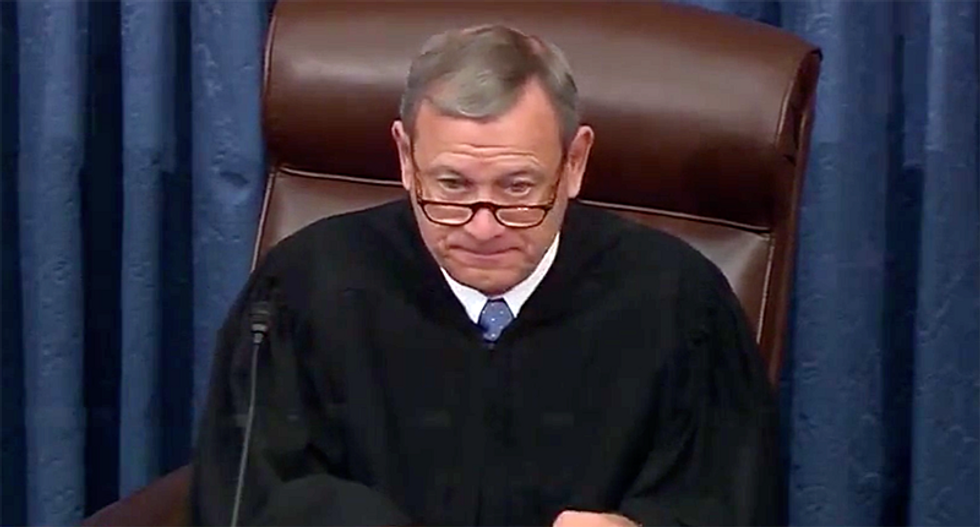 Supreme Court Justice John Roberts was blasted in The Washington Post on Thursday for his culpability in creating the dynamics that resulted in President Donald Trump -- and his impeachment.

"There is justice in John Roberts being forced to preside silently over the impeachment trial of President Trump, hour after hour, day after tedious day," Dana Milbank wrote. "Roberts’s captivity is entirely fitting: He is forced to witness, with his own eyes, the mess he and his colleagues on the Supreme Court have made of the U.S. political system. As representatives of all three branches of government attend this unhappy family reunion, the living consequences of the Roberts Court’s decisions, and their corrosive effect on democracy, are plain to see."

"Ten years to the day before Trump’s impeachment trial began, the Supreme Court released its Citizens United decision, plunging the country into the era of super PACs and unlimited, unregulated, secret campaign money from billionaires and foreign interests. Citizens United, and the resulting rise of the super PAC, led directly to this impeachment," he wrote. "The two Rudy Giuliani associates engaged in key abuses — the ouster of the U.S. ambassador to Ukraine, the attempts to force Ukraine’s president to announce investigations into Trump’s political opponents — gained access to Trump by funneling money from a Ukrainian oligarch to the president’s super PAC."

The culpability is not just for the direct decisions, but also indirect ways.

"The consequences? Falling confidence in government, and a growing perception that Washington had become a “swamp” corrupted by political money, fueled Trump’s victory. The Republican Party, weakened by the new dominance of outside money, couldn’t stop Trump’s hostile takeover of the party or the takeover of the congressional GOP ranks by far-right candidates. The new dominance of ideologically extreme outside groups and donors led lawmakers on both sides to give their patrons what they wanted: conflict over collaboration and purity at the cost of paralysis. The various decisions also suppress the influence of poorer and non-white Americans and extend the electoral power of Republicans in disproportion to the popular vote," he continued.

"Now, we are in a crisis of democratic legitimacy: A president who has plainly abused his office and broken the law, a legislature too paralyzed to do anything about it — and a chief justice coming face to face with the system he broke," Milbank concluded.

There is justice in John Roberts being forced to preside silently over the impeachment trial of President Trump, da… https://t.co/AMgpHAJmTk
— Dana Milbank (@Dana Milbank) 1579822724.0