'Kicking the can to next week is irresponsible': Progressives rebuke Pelosi for delaying Iran War Powers vote 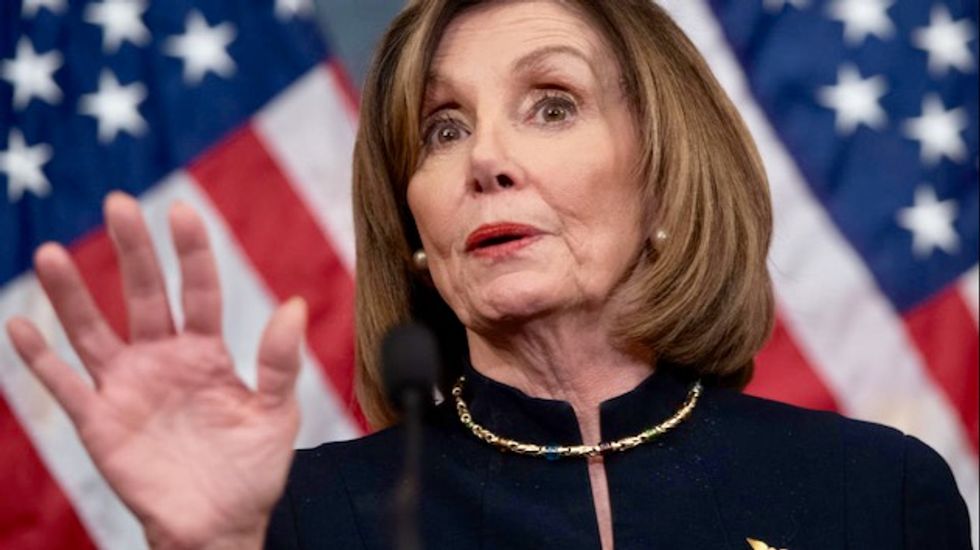 "Every day we wait is a message from Congress to Trump to continue this march to war."

Pelosi's decision to push the vote back to next week, first reported by CNN, came shortly after Iran retaliated for the assassination of General Qasem Soleimani with missile attacks on U.S. airbases in Iraq. A House War Powers vote was expected as early as Wednesday.

"We have a choice—we do not need to double down on escalation. Congress must end this dangerous cycle and declare, with strength and resolve: #NoWarWithIran."

Indivisible—part of a coalition of progressive groups leading nationwide anti-war protests on Thursday—said Iran's strikes should increase, not diminish, the urgency of the congressional effort to restrain Trump, whose hawkish policies and belligerent rhetoric toward Iran have sparked widespread fears of another devastating Middle East conflict.

"Speaker Pelosi, the House should have already voted on a resolution to limit Trump's authority on Iran," Indivisible tweeted Tuesday night. "Every day we wait is a message from Congress to Trump to continue this march to war. After tonight, kicking the can to next week is irresponsible."

Angel Padilla, Indivisible's national policy director, said in a statement that the "anti-war majority of Americans will be paying close attention to what their members of Congress do, not what they say."

According to Politico, top House Democrats are considering abandoning entirely the attempt to constrain Trump's ability to wage war on Iran following the Iranian missile strikes.

"Moderate Democrats had their own reservations about the whole exercise, and are unwilling to draft a resolution that would hamstring the military in its response to future attacks," Politico reported. "They're also hesitant to support any language that would directly repudiate Trump for the Soleimani killing."

Progressive lawmakers, meanwhile, have not wavered in their urgent calls to restrain Trump before he escalates the Iran crisis even further.

"Trump's reckless assassination of Soleimani—with out providing any evidence to the American people or Congress of an imminent attack—has put us on a devastatingly predictable escalatory ladder that threatens America, global peace, and countless lives," Rep. Pramila Jayapal (D-Wash.), co-chair of the Congressional Progressive Caucus, tweeted late Tuesday. "Congress must take over and lead."

In a video posted just ahead of Iran's missile strikes against U.S. bases in Iraq, Khanna said Congress never should have passed the 2020 National Defense Authorization Act, which handed Trump $738 billion in military spending without any limits on his ability to wage war against Iran.

"We should now learn our lesson," said Khanna. "Let us make it very clear. We control the House of Representatives. We will not fund a dollar for any offensive strike on Iran without authorization."

"We will not fund a dollar for any offensive strike on Iran without authorization." @RepRoKhanna calls out Trump's… https://t.co/swDLX3m1vX
— MoveOn (@MoveOn) 1578438900.0

In a column ahead of Tuesday night's troubling developments, Jesse Jackson joined those who said now is the time for lawmakers to act comprehensively and urgently to rein in Trump's war-making instincts and abilities.

"Clearly Congress must assert its constitutional war powers and limit the license of this or any president to wage war or assassinate foreign leaders on a whim. It must insist on public hearings to review the basis for the assassination. We need hearings on what we are doing in the Middle East and how we begin to bring the troops home," Jackson wrote.

"Congress," he concluded, "needs to pass a renewed War Powers resolution instructing the president to bring the troops home, not send more of them to the region. If Congress cannot curb a rogue president, then this republic is in deep trouble. And the American people and its soldiers are headed deeper into wars without victory and without end."