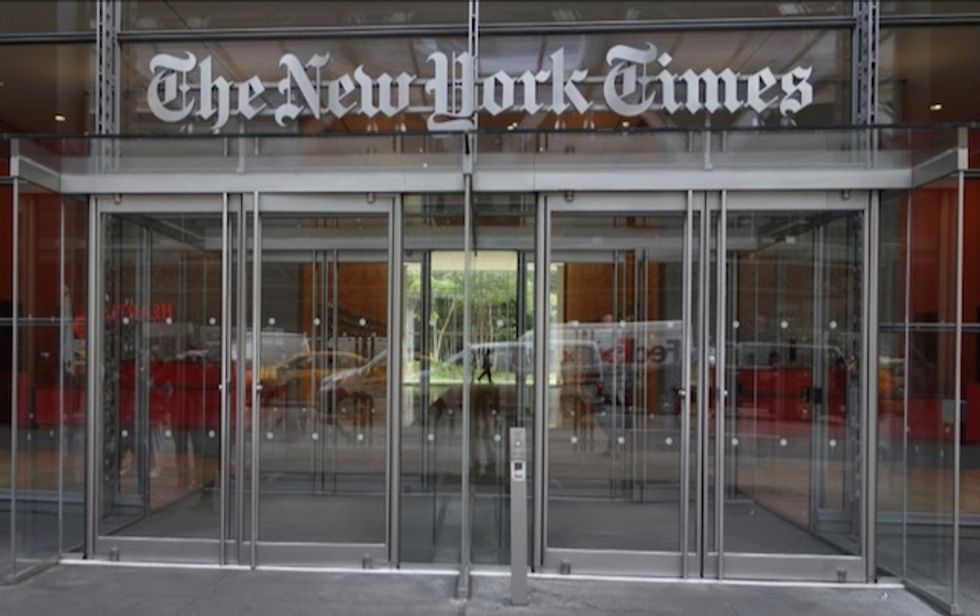 The newspaper's endorsement of both Warren and Klobuchar, said one critic, reveals "so much about the liberal reaction to a resurgent left, a reaction that holds Trump as an aberration and polite, well-mannered centrism as the greatest virtue."

A flood of criticism has been directed at the New York Times overnight and into Monday following its dual endorsement of Democratic presidential candiates Amy Klobuchar and Elizabeth Warren after a week of self-promoted hype over its process.

The Times editorial board—which publicized its endorsement with transcripts of interviews and selected video clips of candidates throughout last week—announced its decision Sunday night at the conclusion of an hour-long show aired on the FX channel.

But from the TV reality show-esque manner in which the board made its announcement, to framing the two senators as "the radical and the realist models" worthy of consideration, to whitewashing U.S. empire, the editorial board came under fire from progressives.

"If I were going to go all weak-kneed like the New York Times," McKibben wrote on Twitter, "I'm not sure I would have picked the day devoted to our most clear-eyed moral leader to do it."

It is "always worth remembering," he added, "that the NYT editorial board slammed MLK when he came out against the Vietnam War."

Progressive journalist Sarah Lazare, the web editor for In These Times, suggested the endorsement itself—which she described as "a love letter to capitalism and war"—reveals more about the newspaper than the two candidates it chose to back.

The NYT endorsement is a love letter to capitalism and war. The reasons they give--their applauds and scolds--revea… https://t.co/WoHPf0PCmC
— Sarah Lazare (@Sarah Lazare) 1579495847.0

The language of the NYT endorsement is so violent, just casually endorsing brutal wars and countless human deaths in the borderlands and more deaths at the hands of a ruthless healthcare industry—without even giving these things mention, all while claiming the mantle of civility," Lazare added in a separate tweet.

Other critics focused on the discrepancy between the urgent action scientists say is needed to address the climate crisis and the backing of Klobuchar, who supports the continued use of fracked gas. Biologist and climate activist Dr. Sandra Steingraber said the endorsement was an act of "climate denial."

McKibben, in a Monday tweet, added that "Because we have waited (thanks to the fossil fuel industry) so long to get started, physics leaves us no choice but to move very swiftly. Say, at the speed envisioned by people like Warren or Sen. Bernie Sanders."

Countering the editorial board, who charged that Warren might too "radical" in her climate prescriptions compared to Klobuchar, McKibben said that Warren's more ambitious plans make her, in fact, "far more realistic."

Dr. Leah Stokes, political science professor University of California, Santa Barbara, said the endorsement showed the editorial board is "still ignorant of the magnitude of the climate crisis." Her Twitter thread added:

Other critics noted how voters, unlike the editorial board, don't have the option of backing two candidates.

"The split decision between Klobuchar and Elizabeth Warren makes literal the feeling in the air that the Times's endorsement directs no one's vote," opined Daniel D'Addario at Variety. "In this case, it'd be impossible to vote for the Times's slate without casting two ballots. The value of a Times endorsement, perhaps, redounds solely to the Times, reflecting its vision of itself and how it wants to be seen."

Another line of criticism was the process the Times used for the affair. Media critic Adam Johnson said the paper turned "their endorsement process into a tawdry reality TV show."

Writing at The New Republic, Alex Shephard said "the Times has turned the selection into a weeklong affair, a mix between Donald Trump's The Apprentice and LeBron James's 'The Decision.'"

At the end of the day, though, some observers suggested the endorsement doesn't really warrant any attention all.

Who gives a shit who the NYT editorial page endorses? Does it affect even a non-trivial number of votes? Seriously… https://t.co/jDPoBYN66t
— Glenn Greenwald (@Glenn Greenwald) 1579467612.0

"Lotta people gaming out what the NYT endorsement means but let's be real," said journalist Ken Klippenstein: "nobody really gives a shit."