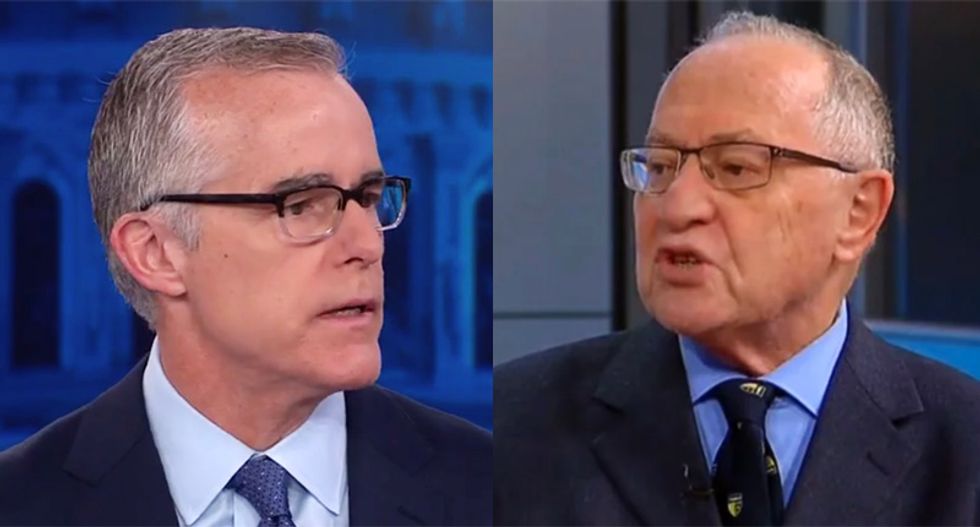 Appearing on CNN on Thursday morning, former FBI Deputy Director Andrew McCabe shot down a proposal from Donald Trump attorney Alan Dershowitz that the president's defense team should get one witness for every witness that the Democratic impeachment managers get, saying that is not how real trials work.

Appearing on Fox News, Dershowitz attempted to make the case that Republicans should be allowed to call in Hunter Biden, son of former Vice President Joe Biden, as a matter of fairness, saying, "If I were a defense lawyer in a case and they were trying to prosecute my client for making statements about corruption that weren't true, the first witness I'd call is the witness about whom the conversation took place. so, of course, you could never have witnesses here without Hunter Biden being a central witness."

With CNN contributor John Harwood pointing out there is no evidence that Hunter Biden broke the law, panelist McCabe was asked by CNN's Poppy Harlow about some of Dershowitz's proposals.

'There is a few things packed in there," McCabe began. "First, the idea that witnesses are somehow.... 'If you get a witness, I should get a witness,' that does not exist in American jurisprudence. If a witness is relevant, the testimony is allowed as long as a judge doesn't determine the testimony would be more prejudicial than probative."

"That's certainly potentially the case with Hunter Biden," he elaborated. "He's not a fact witness. He has no direct access to any of the facts of the underlying allegations. His only relevance would be if you could imagine Hunter Biden coming in and essentially admitting that he and his father were engaged in corrupt practices in Ukraine, which I find to be a pretty remote possibility. But if he did that, it would theoretically prove the president's intent in asking for the investigations was some sort of a legitimate effort."