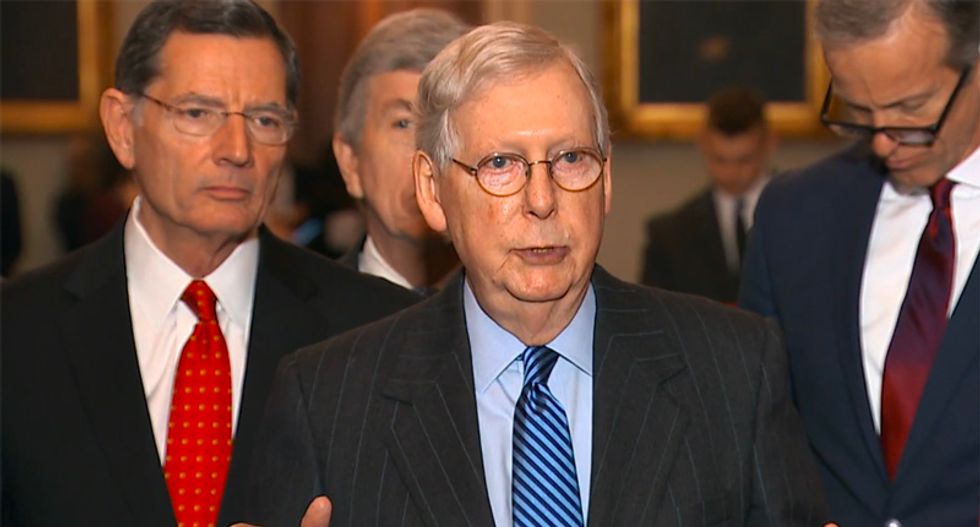 According to a report from Politico, Senate Majority Leader Mitch McConnell is under pressure from the White House and some of his Republican colleagues to move quickly to acquit Donald Trump by speeding up his impeachment trial while not upsetting some wavering GOP lawmakers who are fearful for their reputations in an election year.

The report notes that a Trump acquittal is a foregone conclusion, with GOP lawmakers admitting as much.

“The question is going to come to ‘Have you heard enough to make a decision or do you want witnesses?’ If people say, ‘We’re ready to vote,’ we’re going to vote right then,” explained Sen. John Barrasso (R-WY).

"The Republican strategy — which is still fluid — could mean senators have limited time between key procedural votes and the final vote on whether to convict the president of abuse of power and obstruction of Congress. And with the odds growing against additional witnesses being called, Senate Majority Leader Mitch McConnell (R-Ky.) will face critical decisions on how fast he can bring the proceedings to an end," Politico reports.

At issue is GOP lawmakers who don't want to give the appearance of a rush to acquit who see a quick end as damaging to themselves and the party.

"McConnell will have to avoid alienating centrist Republicans during the endgame if the Trump proceedings end quickly. Already Sens. Susan Collins (R-Maine) and Rob Portman (R-Ohio) have pushed back against McConnell’s attempts to speed up the trial and deviate from the Clinton precedent," the report continues. "Some senators may object to a final vote on Trump’s guilt or innocence without a chance to make a statement to their colleague behind closed doors. McConnell could then agree to a shorter period than used in the Clinton trial, although [Sen. Chuck] Schumer will likely try to drag it out."

“So the rules would have the vote on the articles come up immediately after a failed vote on witnesses. I think we are exploring what our options would be if we lost that witness vote,” explained Sen. Chris Murphy (D-CT). “McConnell, I would imagine, would go straight [to the acquittal vote]. The rules don’t provide for anything.”

Asked what his plans are should McConnell attempt to speed up the proceedings, Schumer stated, "You’ll hear from us. I’m not going to talk about that right now.”