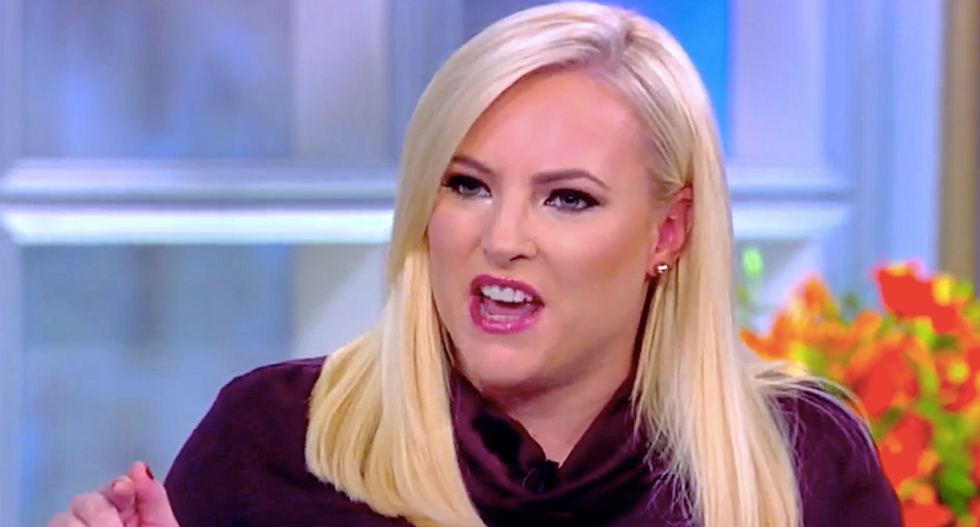 During the Monday broadcast of ABC’s “The View,” co-host Abby Huntsman announced that she was leaving the popular talk show and would be working on the 2020 campaign of her father, former Utah Gov. Jon Huntsman (who is running for that position again). But CNN Business reported that according to its sources, Abby Huntsman’s main reason for leaving “The View” isn’t her father’s gubernatorial campaign but rather, a “toxic” work environment and friction with co-host Meghan McCain — who, Shamira Ibrahim asserts in a January 16 op-ed for the New York Times, is extremely difficult to work with.

McCain is furious with the Times for publishing the op-ed.

Abby Huntsman isn’t the only one on “The View” who has had a hard time working with McCain. Friction between McCain and liberal co-host Joy Behar has been widely reported. And in her op-ed (which is headlined “‘The View’ Has a Meghan McCain Problem”), Ibrahim writes, “In the early days of her arrival, the conservative commentator’s on-air spats made for fun TV. Now, it’s just exhausting.”

Ibrahim goes on to say, “It has become the norm to watch Ms. McCain, the daughter of the late Sen. John McCain, square off against her co-hosts in a barrage of vehement exchanges — leveraging her political parentage, accusing her co-hosts of supporting infanticide, using her platform to push back against assault weapons bans and progressive immigration policy. The increasingly aggressive rejoinders by her co-hosts have escalated to the daytime TV equivalent of a cage fight for the viewing public.”

The environment on “The View,” Ibrahim writes, isn’t one of friendly debates, but one of “vitriol.”

“The injection of vitriol undercuts the substantive political critique that is supposed to be raised during these segments,” Ibrahim explains. “Every combative segment is immediately countered by a claim that it’s all just a harmless debate among friends, making the ostensibly organic on-air confrontations feel all the more performative, no matter how genuine the sentiment.”

McCain, responding to the op-ed on Twitter, posted, “.@nytimes – everyone already knows how much you despise red state, pro life, pro #2A conservative women, and wish we would all just go away.”

But McCain isn’t the only conservative on the show. The outgoing Abby Huntsman is an outspoken Republican and will be working on a GOP gubernatorial campaign in a deep red state. And CNN’s Ana Navarro, a GOP strategist and Never Trump conservative, has been part of the show’s Friday lineup.

In her Times op-ed, Ibrahim notes, “Someone has created a Change.org petition to replace Ms. McCain with the frequent contributor and fellow conservative Ana Navarro, who has been celebrated for her moments sparring with Ms. McCain. As I write this, it has close to 9000 signees, and counting.”

Cheered on by an enthusiastic crowd that espoused conspiracy theories about fraud in the 2020 presidential vote and touted the largely debunked findings of the so-called Maricopa County “audit,” the Senate Government Committee on Monday advanced a slew of bills aimed at curbing or alleviating concerns about election fraud in Arizona, despite little evidence of such incidents.

The committee passed seven bills that proponents described as measures that would prevent fraud in future elections. The legislation included laws mandating counter-fraud security measures, probes into people who can’t prove their citizenship when they register to vote, reviews of election equipment, prohibiting all-mail balloting, changing mandatory recount rules and requiring images of all ballots to be posted online.