Mitch McConnell: 'There is little to no sentiment in the Republican caucus for the motion to dismiss' 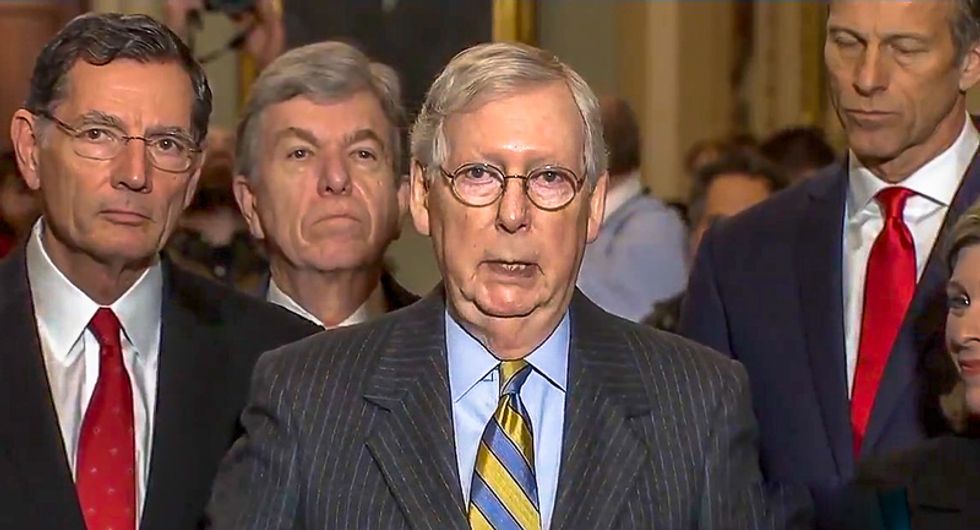 Senate Majority Leader Mitch McConnell (R-KY) on Tuesday admitted that there is "little to no sentiment in the Republican caucus" supporting a motion to dismiss articles of impeachment against President Donald Trump.

At a press conference, McConnell told reporters that the Senate impeachment trial will likely begin next Tuesday.

“There is little to no sentiment in the Republican caucus for the motion to dismiss," McConnell said.

The Majority Leader went on to suggest that Republicans would call their own witnesses if Democrats insist on having new testimony.

"I can’t imagine that only the witnesses that Democrats want to call would be called," he said.

Some Republicans have said that Joe Biden, Hunter Biden and Rudy Giuliani should speak to Senators.

.@Senatemajldr on impeachment timeline: "preliminary steps here this week which could well include the Chief Justic… https://t.co/dGR2HdKVud
— CSPAN (@CSPAN)1579029831.0

MCCONNELL: “there is little to no sentiment for the motion to dismiss” We will see how Trump handles that .
— Rachael Bade (@Rachael Bade)1579029996.0

McConnell on witness question: "We’ll be dealing with the witness issue at the appropriate time into the trial…wh… https://t.co/dYyT0AuWOt
— Heather Caygle (@Heather Caygle)1579030005.0