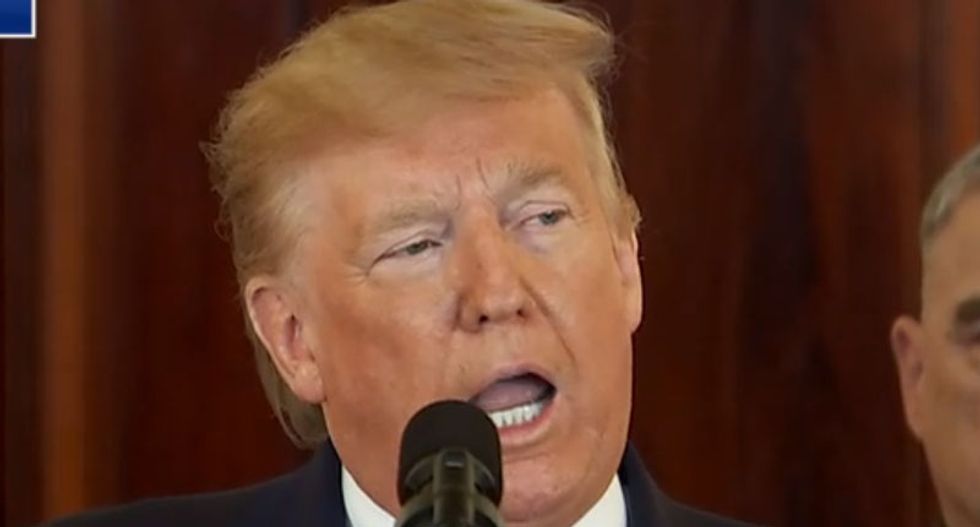 Days after assassination of Qassim Suleimani and a would-be Iranian retribution, Donald Trump took to the White House lectern and ducked saying whether we were going to war or standing down.

Indeed, he gave us a bigger bunch of questions, not answers.

Other than insisting that Iran will never be allowed to have a nuclear weapon, we got no sense that there is a Plan, some understandable strategy that work for military, international, congressional or general American audiences.

Instead, Trump looked back, ridiculing Barack Obama, incorrectly and almost as a tic, for negotiating a “foolish” nuclear agreement with Iran, reciting a laundry list of past bad acts by Suleimani and Iran, and basically calling out America’s European allies for not joining in with him more fully. There was nothing about “imminent” threat, nothing about whether we have ruled out U.S. military actions, nothing about negotiations.

Meanwhile, Ayatollah Ali Khamenei, Iran’s Supreme Leader, said “Last night they received a slap. These military actions are not sufficient (for revenge). What is important is that the corrupt presence of America in this region comes to an end.” Still, the ayatollah didn’t rule out continued use of missiles by proxy militias and Iran-leaning organizations in the state.

Moreover, Trump offered no information to indicate that any “imminent” threat by Suleimani has been eliminated; the Ayatollah immediately replaced Suleimani with his deputy of 20 years.

Trump and the Ayatollah have left me basically confused. Are we “de-escalating,” as Trump and Secretary of State Mike Pompeo say on one day, or increasing our pressures to answer all retaliations, as Trump says the next? Did Iran launch missiles that deliberately missed American troops as a message – and are we accepting that as a gesture? Are Trump, the Iraqis and the Ayatollah agreeing that U.S. troops should leave Iraq?

Is anything clearer today than yesterday, and do we believe any of what we’re hearing from either side? Have we lost the point of all the pushing and pulling?

The major issue here is not missiles or military behavior, it is not what more to squeeze from yet more economic sanctions, it is not even the White House attempt to squash Congress. It is trust and credibility.

To listen to Donald Trump, there is only one way here – for Iran, allies, Congress and lots of others. It is to bow to whatever Donald Trump wants.

Were he to have announced a major diplomatic effort, starting with allowing the Iranian foreign minister to enter the country to go to the United Nations, it’s not even clear that we know what the point would be, other than total capitulation by Iran to whatever terms the United States might demand.

That’s not a formula for successful negotiations.

In the background here, we’re left still dealing with lots of unresolved questions and the tensions created by uncertainty.

We probably all can agree that to a certain extent, both Trump and the Ayatollah are trading barbed remarks – and actions – for their respective domestic audiences. The Ayatollah and Iranian officials wanted to signal to the millions who filled the streets to protest or mourn after the killing of Suleimani; Trump wanted to present a show of strength.

Instead, we have more questions.

What did trigger the assassination effort over the objections of the U.S. military, other than a gut response by an impulsive Trump? Why is U.S. Intelligence now wonderful, when last week they representing the anti-Trump “Deep State”? Does the president have unlimited War Powers, or do Democrats questioning Trump’s authority have a realistic and important constitutional question here? Are we leaving Iraq? Are we abandoning future fighting against thousands of ISIS members now that we have “defeated” the caliphate? Weren’t we just announcing a need to have U.S. troops protect Iraqi oil facilities? What is our role in defending Saudis and Israelis from attacks from Iran’s military proxies?  What is the role of Russia and China in the Middle East, and are we Americans withdrawing altogether?

What here is on the table to incent the Iranians to re-engage with negotiation towards a new nuclear weapons ban? Until these last couple of weeks, Iran pretty much lived within the constraints of the nuclear agreements to limit development of nuclear weapons. Now Iran says it can go ahead and start processing enriched uranium once again without limit.

Once again, we learn that red hats are not going to provide clarity in complex situations.