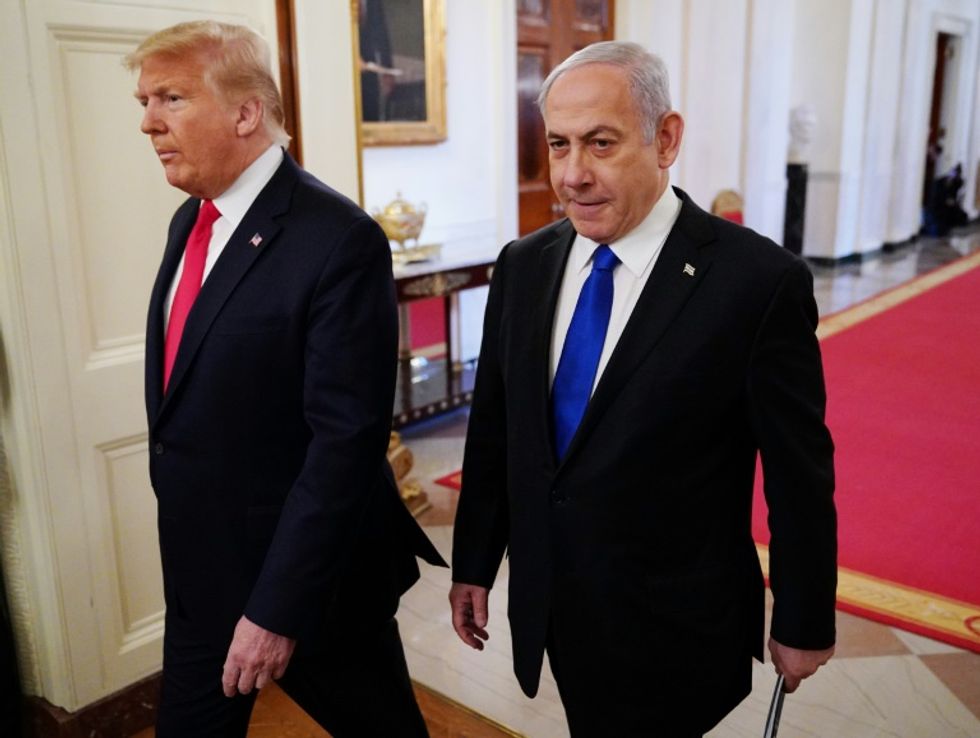 The Israeli army announced an increased presence in the West Bank and near Gaza Wednesday evening, as US President Donald Trump's controversial peace plan sparked outrage among Palestinians.

The plan, seen as overwhelmingly supportive of Israeli goals and drafted with no Palestinian input, gives the Jewish state a US green light to annex key parts of the occupied West Bank.

It was widely cheered in Israel, but sparked fury among Palestinians, with protests breaking out in the West Bank and the Hamas-run Gaza Strip.

One rocket was fired from the strip Wednesday evening.

In response, the army said, "(Israeli) fighter jets and aircraft struck a number of Hamas terror targets in the southern Gaza Strip."

Palestinian demonstrators and Israeli security forces clashed in various locations in the West Bank and further Palestinian protests are expected in the coming days.

The Israeli army announced Wednesday it would deploy additional troops in the West Bank and the near the Gaza Strip.

"Following the ongoing situation assessment, it has been decided to reinforce the Judea and Samaria and Gaza Divisions with additional combat troops," the army said in a statement, using the Israeli terms for the West Bank.

Trump, who unveiled the peace plan on Tuesday at the White House alongside Israel's Prime Minister Benjamin Netanyahu with no Palestinian representatives present, said his initiative could succeed where others had failed.

But the plan grants Israel much of what it has sought in decades of international diplomacy, namely control over Jerusalem as its "undivided" capital, rather than a city to share with the Palestinians.

It also offers US approval for Israel to annex the strategically crucial Jordan Valley, which accounts for around 30 percent of the West Bank, as well as other Jewish settlements in the territory.

The terms have been roundly rejected by Palestinian leaders, with president Mahmud Abbas vowing the proposal would end up in the dustbin of history.

Abbas is expected to visit the UN in the next two weeks to address the Security Council and explain his rejection of the plan, the Palestinian ambassador to the UN said Wednesday.

Hamas said it could never accept anything short of Jerusalem as capital of a future Palestinian state.

US Secretary of State Mike Pompeo urged the Palestinians to "come up with a counter-offer".

"I know the Israelis would be prepared to sit down and negotiate on the basis of the vision that the president laid out," Pompeo said, as he headed to Britain on a five-nation tour.

In the West Bank city of Bethlehem, demonstrators threw rocks at Israeli border guards who responded with rounds of tear gas.

Three protesters were hospitalised after being hit by Israeli fire in clashes near Ramallah in the central West Bank, the Palestinian health ministry said.

In Khan Yunis in southern Gaza, protesters set tyres alight, while others hoisted banners vowing they were "united against the deal of the century", in a jibe against Trump's proposals.

Trump's plan foresees the creation of a "contiguous" Palestinian state but under strict conditions, including a requirement that it be "demilitarised".

The Palestinians would only be allowed to declare a capital in outer parts of east Jerusalem, beyond an Israeli security wall.

Those terms were warmly received by some in Israel.

"History knocked on our door last night and gave us a unique opportunity to apply Israeli law on all of the settlements in Judea (and) Samaria," said Israel's rightwing Defence Minister Naftali Bennett.

The Blue and White party led by Benny Gantz, Netanyahu's main election rival in March 2 polls, embraced Trump's proposals as offering "a strong, viable basis for advancing a peace accord with the Palestinians".

Meanwhile, on the streets of Tel Aviv, some residents voiced concern that Trump had paid no attention to what the Palestinians actually want.

Major powers and some regional players responded with caution, saying Trump's project deserves study, while stressing that a durable solution to the conflict can only emerge through Israeli-Palestinian negotiations.

AFP / SAID KHATIB Palestinian demonstrators burn images of US President Donald Trump (C) as they protest against a US brokered Middle East peace plan, in Rafah in the southern Gaza Strip

The ambassadors from three Arab nations -- Oman, the United Arab Emirates and Bahrain -- were at the White House, providing some evidence of Trump's claim to have growing support around the region.

"We do not know if the American proposal is mutually acceptable or not," Deputy Foreign Minister Mikhail Bogdanov told Russian news agencies.