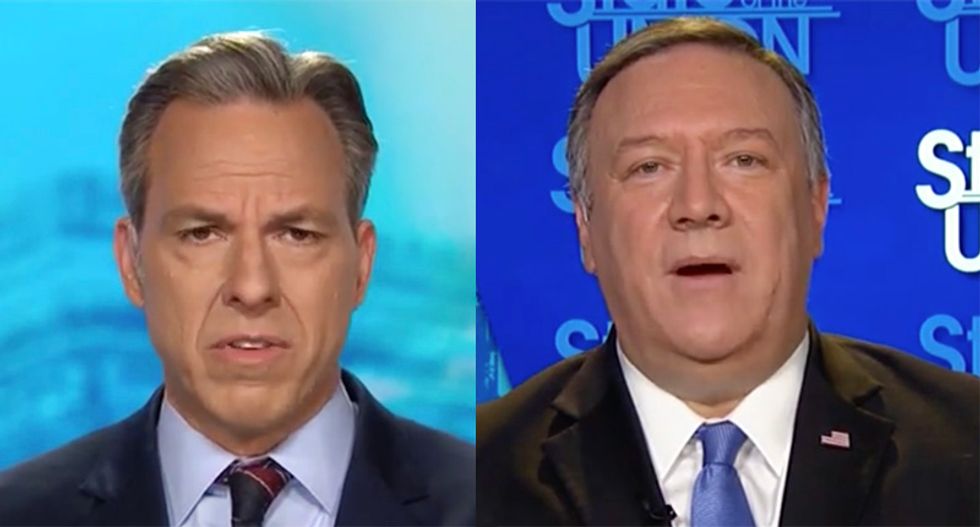 Appearing on CNN's "State of the Union," Secretary of State Mike Pompeo snapped at host Jake Tapper when he was questioned over the wisdom of Donald Trump's decision to order the killing of Maj. Gen. Qassim Suleimani, Iran’s most powerful commander, which has now put U.S. military members and overseas Americans at risk.

In a long interview where Pompeo insisted that Suleimani was planning an attack -- without presenting any evidence -- Tapper pressed the White House administration official on what happens next.

"When you are talking about the attacks are imminent, days or weeks?" Tapper asked.

"If you are an American in the region, days or weeks is not relevant. We have to prepared and be ready. We took a bad guy off of the battlefield and we made the right decision and there are less risks today to the American forces in the region as a result of it," Pompeo recited back. "And I am proud of the effort that President Trump undertook and the execution of the military was phenomenal and the work by the diplomats was very fair and powerful and effective."

"I keep coming back to the fact that you are saying it is safer, at the same time that the American government is telling all Americans to leave Iraq. Again, I understand that in the long run --," Tapper pressed only to have Pompeo cut in and snap, "You don't seem to understand that. Oftentimes I have heard you say, Jake, America thinks about the moment and does not think about the long-term strategic implications."

"I don't know I have said it about America, but leaders about this country," Tapper shot back.

"Yes, sir. This administration is thinking about exactly that," Pompeo insisted. "We are setting the conditions for successful and safe America. A prosperous America at home, and secure America abroad and that is the Middle East strategy and what we have done over the last three years in Iraq and pushing back against the Islamic Republic of Iran and we will not stray from the course, Jake."

Previewing the upcoming impeachment trial of Donald Trump slated to start in two weeks, CNN's Jeff Zeleny claimed the former president is still searching for more legal representation but has been getting the brush-off from attorneys who want nothing to do with him.

Speaking with host Kate Bolduan, the White House correspondent stated that the large obstacle facing Trump is his history of stiffing the outside help.

"He's asking a lot of lawyers and many of them are coming through the connection of Senator Lindsey Graham, Republican of South Carolina. So all eyes are on Columbia, South Carolina, looking for lawyers," Zeleny began. "There is a scrabbling underway just two weeks before this impeachment trial begins."

'So that is what is happening here and Lindsey Graham connected him to the former president, but he's also looking for other lawyers," Zeleny continued. "We're hearing there are some other people who are on cusp of signing on but there are questions over payment: the former president has a long history and record of not paying his bills and anything from lawyers to contractors to others. So there are some people from big firms who are saying, 'no thank you,' we are not going to sign on this because there are some worries about all the controversy that comes with it and paying the bill."

"So by the end of the week there will be more of a defense team in place, but there is still a help-wanted sign being hung out by the former president," he added.