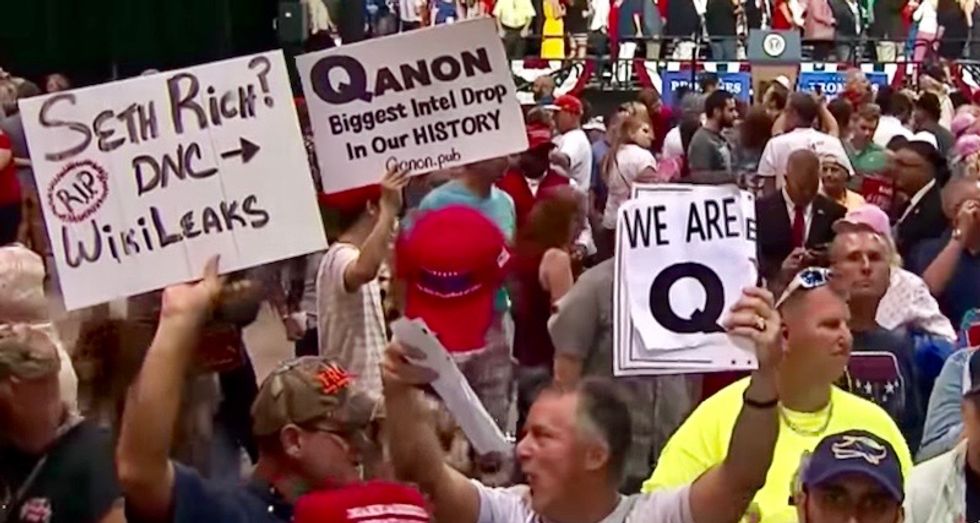 On Tuesday, Will Sommer of The Daily Beast reported that some adherents of the QAnon conspiracy theory are turning to the power of the so-called "Miracle Mineral Solution," or MMS, to protect themselves from coronavirus. MMS is a dangerous scam in which people advocate drinking bleach as a cure-all for just about every disease and disorder on the books — there's even a church based on it.

But one QAnon activist, Jordan Sather, was completely unabashed by all of this — and proudly posted what appeared to be an image of himself about to drink bleach to stick it to the "fake news":

Sommer replied with some degree of amazement:

QAnon is a vaguely defined family of conspiracy theories which posits that everything President Donald Trump has done in his administration so far is a cover for a secret operation to cleanse the world of a global, liberal-run network of sex traffickers — the name comes from an anonymous poster on internet message boards who claimed to have "Q" level security clearance in the government. Some believers further think the whole thing is being guided by a benevolent race of aliens; others think that John F. Kennedy Jr., secretly still alive, is working with Trump to save the world.