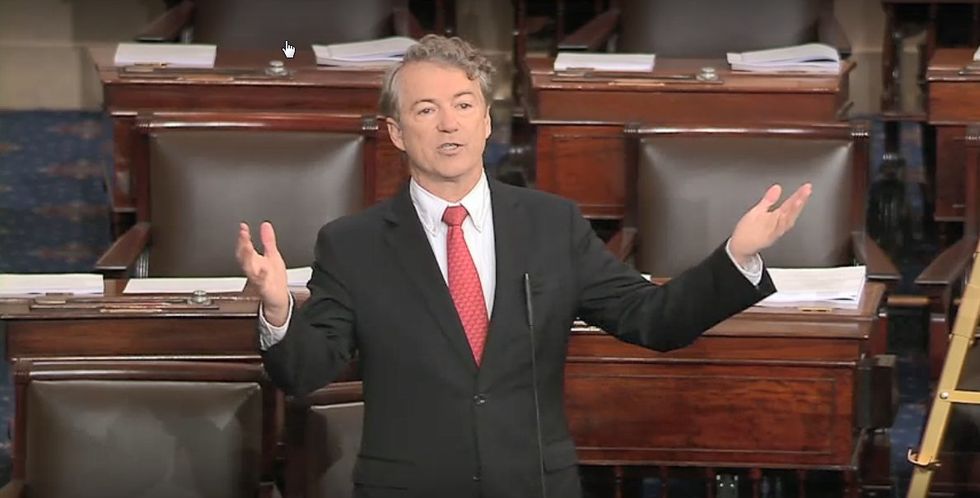 Paul first attempted to ask a question about the whistleblower at the center of the Ukraine scandal on Wednesday and was rebuffed by the chief justice.

On Thursday, he vowed to "insist" that his question be asked.

But Roberts once again shot down the request.

Paul was quickly seen leaving the Senate floor and soon was tweeting.

My question today is about whether or not individuals who were holdovers from the Obama National Security Council a… https://t.co/WHDG0RmwKK
— Senator Rand Paul (@Senator Rand Paul) 1580408383.0

Chief Justice Roberts just proved he is not a potted plant. He correctly used his authority to not out the whistle… https://t.co/KuKdAWtmE0
— Joe Lockhart (@Joe Lockhart) 1580408303.0

GOP KY Sen Paul on Roberts refusing to read his question: I think it was an incorrect finding to not allow a questi… https://t.co/osfRlccMVY
— Chad Pergram (@Chad Pergram) 1580410391.0

Rand Paul, who should be in the impeachment hearing right now, gives a press conference and names the whistleblower… https://t.co/I0F2yB3M4b
— Polly Sigh (@Polly Sigh) 1580408943.0

Sen Paul reads reporters his question. It names the whistleblower and a staffer on the House Intelligence Committe… https://t.co/sauHlWV5AV
— Jamie Dupree (@Jamie Dupree) 1580408414.0