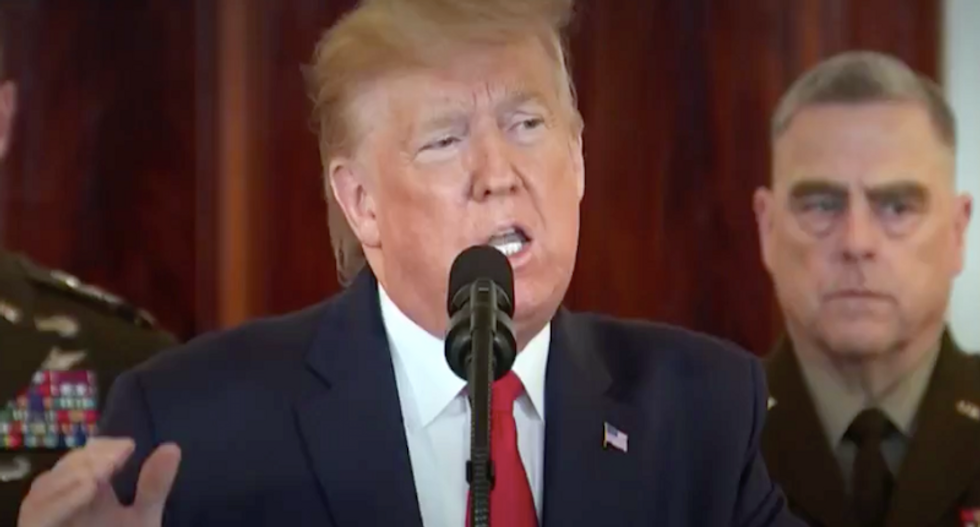 After President Donald Trump went on Fox News and claimed that he ordered the killing on Iranian military leader Qassem Suleimania because he was plotting attacks on at least four embassies, members of his own administration who had seen the intelligence stated they have no idea what he was talking about.

During the Fox News interview, host Laura Ingraham asked, "Did [Suleimani] have large-scale attacks planned for other embassies? And if those were planned, why can’t we reveal that to the American people? Wouldn’t that help your case?”

According to the president, "I can reveal that I believe it probably would’ve been four embassies.”

However, according to the Post, senior officials in the Trump White House disputed the president's claims.

"A senior administration official and a senior defense official, speaking on the condition of anonymity to discuss classified information, said they were only aware of vague intelligence about a plot against the embassy in Baghdad and that the information did not suggest a fully formed plot," the Post reports. "Neither official said there were threats against multiple embassies"

The report goes on to note, "The senior defense official did not directly contradict Trump but said there was concern that there might be an attempt to place a bomb at the Baghdad embassy, a heavily fortified structure in a secure area of the Iraqi capital," before adding, "The senior administration official said that Trump has been fixated on not allowing an attack on a U.S. diplomatic facility, out of fear of being compared unfavorably to his predecessor."

"The embassy in Baghdad did not receive an alert commensurate to the threat Trump described, said a person familiar with the situation, who was not authorized to comment publicly," the report continues, pointing out, "When the U.S. government has specific information about threats to embassies, warnings or alerts are often sent to embassy personnel to be vigilant."