Sorry, GOP, the whole 'my witness for your witness' thing isn't the law -- it only casts doubt on you: Ex-prosecutor 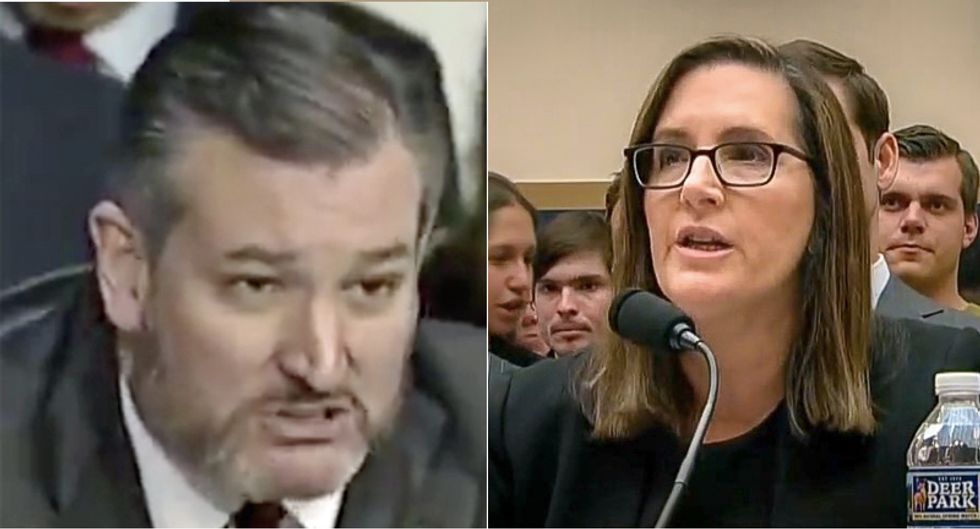 In an op-ed for the Washington Post, former federal prosecutor Joyce White Vance explained that the idea of "witness reciprocity" that Republicans seem to think exists, isn't actually a thing.

"Witness 'reciprocity' isn't a thing. So no, there can't be a Biden for every Bolton. Only testimony that bolsters or casts doubt on facts necessary to deciding on the articles of impeachment is relevant at trial," she wrote.

Her comment comes after Sen. Ted Cruz (R-TX) decided that because Democrats want a first-hand witness to testify at the impeachment trial in the Senate. Cruz, wants someone that has nothing to do with President Donald Trump's obstruction of justice or his abuse of power, and instead is part of one of the president's conspiracy theories.

"Leave aside for the moment that no evidence of illegality by Biden has turned up, and Trump’s Justice Department has not charged anyone, which it could presumably do if such evidence existed," wrote Vance. "The implication was that reciprocity might discourage Democrats from pursuing witness testimony. Some commentators took up Cruz’s challenge, however, saying Democrats should be willing to offer up Hunter Biden, or even his father, Joe Biden, Trump’s rival in the 2020 presidential race, to get the testimony of firsthand witnesses such as Bolton, Trump’s former national security adviser, acting White House chief of staff Mick Mulvaney and others during the Senate proceedings."

As Sen. Kamala Harris (D-CA) explained, the Republicans may as well ask to subpoena Santa Claus.

Vance went on to say that the idea of “witness reciprocity” isn't the way the legal system works. Cruz, who went to Harvard Law School should be aware of that fact.

"It might seem like a good idea at first: Treat each side equally and give them the same number of witnesses," Vance explained. "But in our system, evidence must be relevant to the charges or issues at hand before it can be introduced in a trial. To be relevant, evidence must tend to make the existence of any fact that is necessary to deciding the case more or less likely than it would be if the evidence was unavailable to the decision-maker. The rule of relevance ensures that cases are decided based on evidence, not distraction or trick. It compels focus on the issues in the case being decided, not those in any other matter."

US states, manufacturers to decide if gov't benefits apply to imported baby formula

(Reuters) - State officials and manufacuturers are working out whether baby formula imported from outside the United States to address severe supply shortages will be available to families who rely on government discounts to make it affordable, a U.S. Department of Agriculture (USDA) official said on Tuesday.