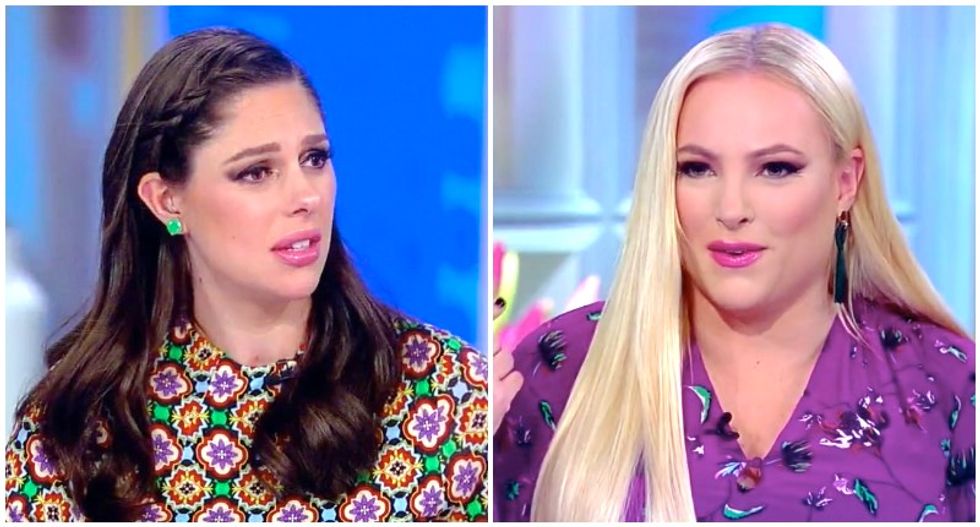 Abby Huntsman refused to shoot down rumors of a "toxic culture" on her way out of "The View."

“They threw Abby under the bus,” a "View" insider told the website.

The executives asked Huntmsan to put a positive spin on workplace conditions at the show, but instead took the advice of "View" moderator Whoopi Goldberg -- who urged her not to go beyond the warm goodbyes and praise she shared with co-hosts after making her announcement public, the sources said.

Huntsman has complained to Fedida in the past about tabloid leaks about backstage intrigue on the show, the Beast reported, and she's apparently furious about a Daily Mail "exclusive" claiming that she left the show because her future was "hanging by a thread" and that network executives wanted to push her out in favor of Republican guest host Ana Navarro.

Reports have also indicated that her relationship with fellow conservative and off-air friend McCain has suffered from backstage drama, including a Dec. 12 blowup over an on-air discussion about breastfeeding.

McCain, who revealed in July her heartbreak over a miscarriage, was reportedly hurt and annoyed that Huntsman, who gave birth last year to twins and has a toddler daughter, frequently discussed her children on the show.

Off the air, McCain attacked Huntsman, and complained her friend never defended her -- which Huntsman emotionally denied, according to a source familiar with the discussion.

The two stopped speaking for a time, sources told the Beast, but have recently repaired their relationship, but Huntsman was eager to escape the drama.