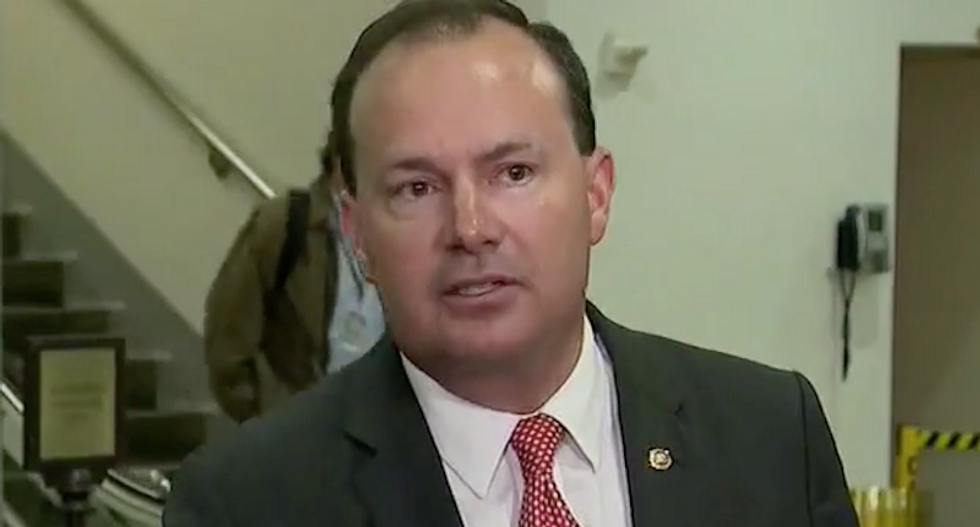 The audience went wild on "The View" after watching a clip of Sen. Mike Lee (R-UT) calling out the Trump administration's congressional briefing on Iran.

The Trump-friendly Utah Republican was furious when he left the briefing, where Lee said administration officials justified the assassination of Iranian general Qassim Suleimani, and told lawmakers not to publicly question their actions.

"I find that absolutely insane," Lee told reporters afterward. "I think it's unacceptable."

The audience apparently was, too, because they greeted Lee's remarks with sustained applause.

"We have all been waiting for someone else to not blame it on the Democrats," Goldberg said. "You can't blame this on the Democrats. This is what you saw and heard, you were in the room and you didn't buy it. Think of when next time you start questioning things, when people say, 'I'm not sure I buy this.' This is how people feel -- they heard it, they saw it. You saw it, you heard it, you didn't buy it."

"Thank you," she added, "because this gaslighting stuff really needs to stop. Everybody has to get on board. Is it good behavior, is it bad behavior? Did they not tell you what you needed to know? No, they didn't, and I'm so thrilled that finally somebody said, 'Okay, all right, this is a pile of doggy doo -- and this was a pile of doggy doo."

"Mike Lee is my senator in Utah," Huntsman said, "and I know him very well, and he's actually one of the truest conservatives in Washington, D.C., and I saw that video yesterday and I thought, 'Thank you,' because he's speaking on what's best for this country."

"Here's the thing with Trump, when they're saying in that room believe our intelligence, there's stuff we can't tell you, that would be more credible if the president didn't say time and time again that he didn't trust or believe his own intelligence community," she added. "I'm sorry, but that's where you lose me. Yes, I might believe you, but when I see you in Helsinki standing next to Vladimir Putin undermining our intelligence community, saying you believe Putin over what our people are telling you, when you are tweeting out that you want the whistleblower's name public because it might make you look bad, that's when I don't trust any of this. That's when we have to say to ourselves, things are screwed up right now."