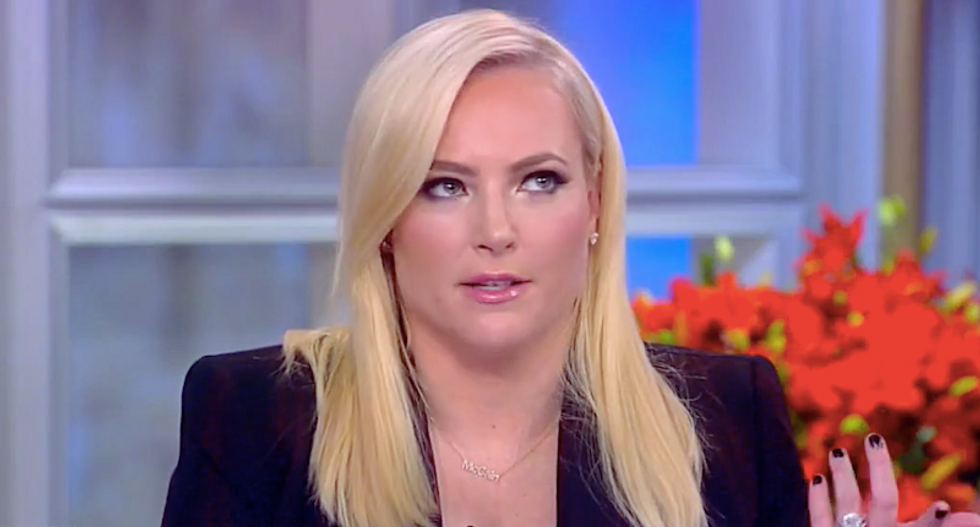 "The View" co-host Meghan McCain changed the subject from Arizona's Republican senator rudely rejecting a reporter to the clothing worn by the state's Democratic senator.

Sen. Martha McSally (R-AZ) called CNN's Manu Raju a "liberal hack" after he asked her about new impeachment evidence, and McCain made clear she hadn't been elected to her seat.

"She didn't earn it in the traditional sense of votes, it's an extremely tight race," she added. "Arizona could turn blue which would -- pigs may start flying around the studio if that ends up happening. She is fundraising off of this with Trump supporters but unfortunately there's a lot of states like Utah, Arizona (and) Nevada that I think people just assume are going to be full red forever, and it's not. It's very independent and fringy, and I think there's a reason why it has such a long history within Arizona with people like Barry Goldwater. I think she's playing her cards completely wrong."

Then she abruptly changed the subject to her home state's other senator.

"You know who's playing it completely right? My other senator, Kyrsten Sinema, with her fashion choices on the floor of the Senate," McCain said, and producers were ready with a photo of the lawmaker. "Look at that, that's my senator -- look at that outfit. I love everything she's doing. She's very independent. She's a Democrat but she's very -- she votes on the right, as well, and (McSally) should take more pages from Kyrsten Sinema, as far as I'm concerned."