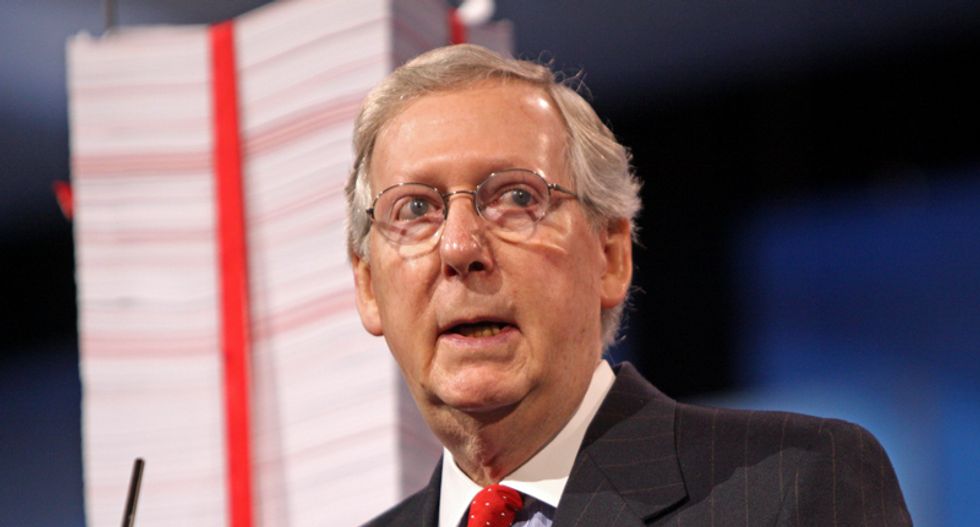 Senate Majority Leader Mitch McConnell has gotten all 53 Republican senators to back his rules for President Donald Trump's impeachment trial, but there are a few fence-sitters who could complicate his acquittal schemes.

McConnell and Senate Minority Leader Chuck Schumer will spend the trial trying win support from a handful of moderate or vulnerable Republicans, but the likelihood of Trump's conviction and removal remains vanishingly low, reported Politico.

“Different people are in different political situations and different parts of the country come to it with different predispositions,” said Senate Majority Whip John Thune (R-SD). “You have to try and balance all of that. It’s all about the majority. It’s all about 51. It’s about how we get 51?”

Three GOP senators -- Susan Collins (ME), Lisa Murkowski (AK) and Mitt Romney (UT) -- have signaled they'd like to hear from additional witnesses, but they need a fourth Republican to break from the majority to join them.

If Democrats get a fourth Republican vote for additional witnesses, it most likely will come from a group that includes Sen. Lamar Alexander (R-TN), who's retiring, or Senate institutionalists such as Roy Blunt (R-MO), Rob Portman (R-OH) or Pat Toomey (R-PA).

But so far, none of those four have indicated how they'll vote.

There are about 40 Trump hardliners in the Senate who almost certainly won't vote to hear additional witnesses, unless McConnell agrees to allow the president's defense team to call Joe Biden's son, Hunter Biden.

GOP defections may not even matter, if any Democrats such as Sens. Doug Jones (D-AL), Joe Manchin (D-WV) or Kyrsten Sinema (D-AZ) vote against additional testimony.

Most Democrats, however, have decided that Trump is guilty, but more evidence is needed before voting to convict.

Even if they lose the Senate vote, they plan to press impeachment -- and a possible acquittal -- to take back the White House and a Senate majority in November.

MSNBC's Chris Hayes on Thursday examined the campaign finance scandals by Rep. Lauren Boebert (R-CO) and compared it with the corruption practiced by Viktor Orbán, the right-wing authoritarian ruling Hungary.

Hayes described some of the corruption allegations against Orbán, saying it is "a story as old as the time, stuffing his own pockets, one of the oldest grifts, the populist who uses populism as a cover for corruption."